Another Road Trip Along the Lighthouse Route 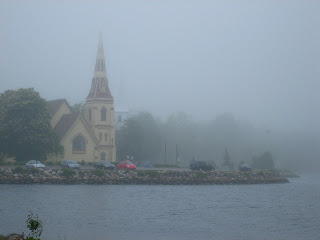 Before I share my little adventure on the Lighthouse Route that runs along the southern coast of Nova Scotia , I want to mention another random thing about me....I'm a sucker for romantic historical (and mythical) legends. I love King Arthur, Guinevere, Merlin and all the Knights of the Roundtable. And one of my all time favorite novels is The Mists of Avalon

by Marion Bradley Zimmer - well actually, the whole series. The High Priestesses live in the mythical, magical land of Avalon that only they can travel to, naturally through the mists.

One thing I truly love about Halifax and all along the coasts of Nova Scotia are the fogs. They are nothing like the thick, smoggy, dark fogs of Toronto. They are light and they seem to move magically in the wind. It's the salt air from the ocean, apparently and it's wonderful. I've been trying to take an early morning shot of the mist on the lake behind the house, but haven't been able to capture it. The photo at the top of the post is of a church in Mahone Bay, by the way. Now, doesn't it say MAGIC to you?

Now that I've set the stage....on with the adventure. We started off on Saturday in the light misty, grey rain and drove along the old highway #3. Roads in Nova Scotia (at least all the ones I've been on) are windy, hilly and for the most part 2 lanes. The views everywhere are spectacular - tons of lakes, large and small, trees of every shade of green (I can't even imagine what Fall will be like, but I don't want to get ahead of myself here), beaches, both rocky and sandy...

We decided to go further along the Lighthouse Route than we've been before. We passed lots of little villages along the way, some in coves with rocky shorelines and peeking in and out of the mist were islands dotting the horizon. 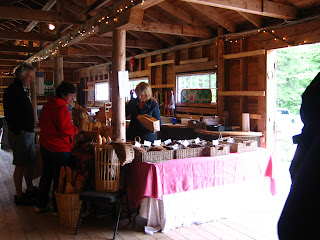 Our first stop was in the town of Hubbard, actually at the Farmer's Market. Like the one in Halifax, it takes place only on Saturday mornings, sells home baked breads, fair trade coffees, local cheeses, meat, local fish & seafood and, of course has Celtic musicians playing. One place we checked out for another trip is The Shore Club . They serve lobster dinners during the summers. 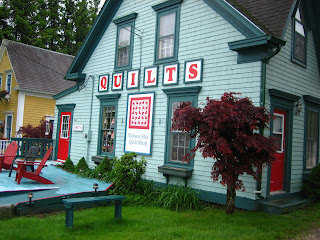 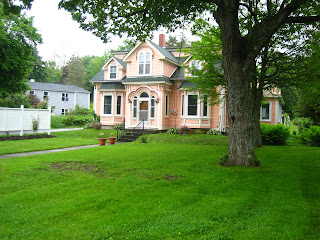 Check out the misty fog over the water behind this spectacular blue house with gorgeous lawns all decked out in their floral best. 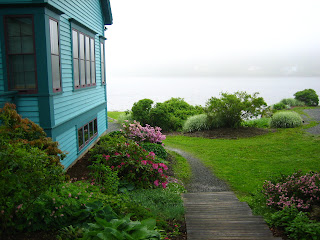 And there were other lovely towns and glorious stretches of beaches we'll have to return to when it's warm and sunny. I can't wait.

But of course we had to have lunch and naturally we had to eat what everyone comes to the Maritimes for.... 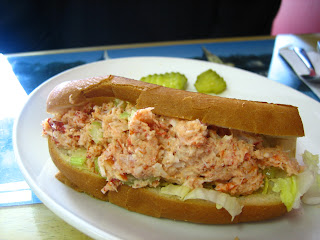 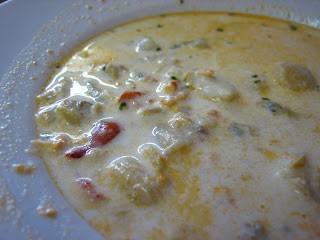 and Seafood Chowder with big chunks of lobster, clams, scallops and other lovely local fish. We would have stopped for homemade ice cream, but it was too cold and really raining by this time.

So it was off to Lunenburg, (home of the Bluenose II for you sailing fans), which also is a World Heritage site. So picturesque and charming, that you really do have to see for yourselves. That said, I will share the view from our room...That's the Harbour. What you can't see are all the heritage houses throughout the town. I love the signages..."this house was built for Mr/Dr So-and-so" or "the carpenter". You can take whale watching cruises or go out on a lobster boat or take a ride in a horse drawn carriage to see the historic town close up. 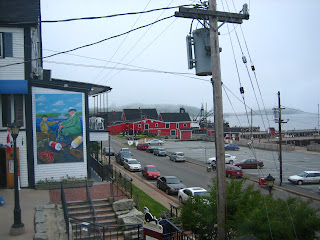 We're planning on going back for the Candlelight Walking Tour...I'll keep you posted.

But, it's time for dinner and we ate at a place my son-in-law's mother told me about. The Magnolia's Grill and it's every bit as good as she said it would be. 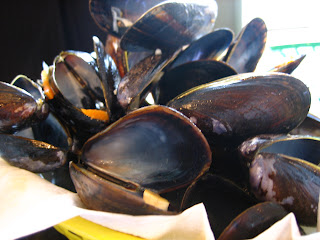 Oops, we were so hungry - that salt ocean air, that I forgot to take the photo of these classic local mussels, until after we had eaten them all! Local pan fried scallops right off the boat - so good and...I thought I'd still be hungry because usually when I'd order scallops back in Toronto, I'd get maybe six...here, the plate was loaded with the tenderest, sweetest scallops ever...I'm drooling as I write this. 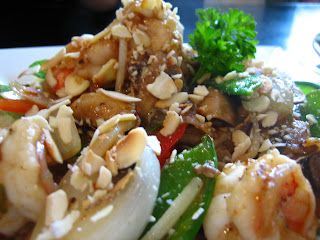 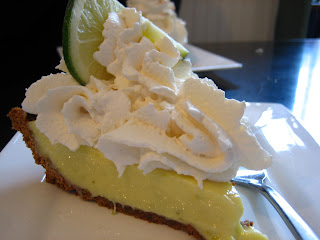 Shhhhh, don't tell the Diet Police....I had this oh so scrumptious key lime pie topped with whipped cream and he had Coconut Cream Pie. 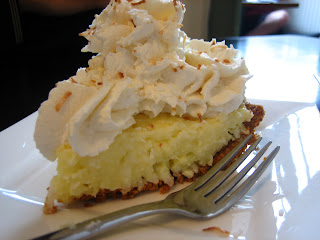 That's it for now...I wonder where our next adventure will be....

Oh Ruth... what a fine post! You made my mouth water and my eyes got all teary. I am truly feeling homesick this week and can not wait for my month long vacation in NS. My ancestors were one of the founding families of Lunenburg and the whole Lighthouse Route gives me a sense of deja vu.

Thanks for sharing those great pictures with us! A very nice place with lots of yummy food...

Ruth, my precious hubby and I are coming up to NS on Sunday, and I cannot wait!!! You are giving me some terrific ideas of new places to visit. This will be our 3rd trip up there together, and we always feel like we're coming home. In fact, our dog is named Halifax...now that's love!

Kim, I'm so glad I captured it well. It really is magnificent.

Rosa, glad you enjoyed our visit and yes...the food is awesome.

Anonymous, glad I gave you some ideas. It is a wonderful place. Have a great visit.

That first picture is so beautiful! You have certainly pushed Nova Scotia up higher on my places-to-see list.

I am so hungry now Ruth! Your post really made me miss New England - Lobster rolls and Chowdah! I miss it! But the Key Lime Pie, I got that goin' on down here!

Gorgeous, romantic photos and the seafood looks so exquisite and extravagant-I'm so jealous

I LOVE the picts - they are all just wonderful!!!! That Coconut Cream Pie is making my mouth water!!!!

It was a wonderful trip...haven't decided what the next one wil be.

Thanks for dropping by.

The Key Lime Pie at Magnolia's is still the best I've ever had. It sounds like you had a lovely time. Lunenburg is a great little town. :)