The Trials & Troubles on the Preserved Lemon Trail 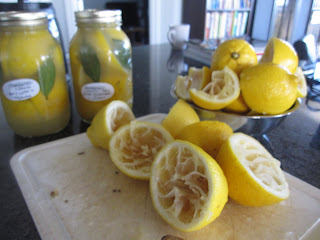 I guess I have to start this post by declaring that I truly am an idiot! Actually, I thought my preserving lemon saga was crazy enough BEFORE I went looking for the recipe I used for my first preserving lemon experience back in 2008. First though, for those of you not familiar with the idea of preserving lemons (and Meyer lemons are preferred, but if you don't have access, ordinary lemons do just fine)...North African cuisines use them to add a brilliant dimension to their dishes - 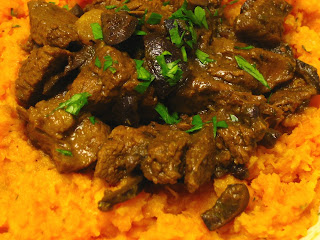 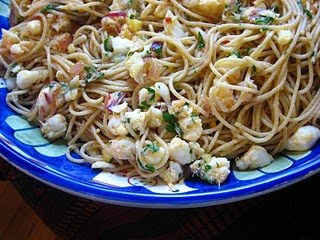 Not to mention this Spicy Crab Spaghetti with Preserved Lemons that I adapted from Mark Bittman. 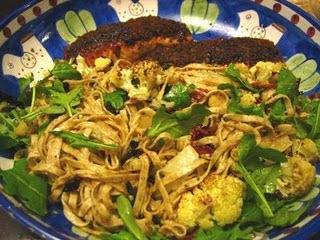 (Brief aside...I am hosting this week's Presto Pasta Night Roundup, so do send in your pasta dishes by Thursday. Just email me the link - ruth (at) 4everykitchen (dot) com) 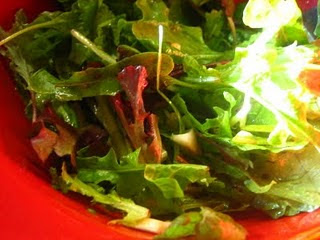 Back to preserved lemons....they are also a wonderful surprise to a very special dressing for spicy mixed green salad. And the thing about these beauties is that a little goes a long way, meaning if you make a jar or two now, you'll have ample through the winter...and a jar full of brilliant yellow brings some much wanted sunlight and visions of an exotic land far away to even the coldest wintry day . But more about my .... hmmm...adventure...yes, that's the word.

This time around I wanted to use the interesting version from Preserve It!

which is a terrific book for both the novice and the expert preserver. The preserved lemon photo on page 296 is gorgeous...whole lemons squeezed into a jar, pretty bay leaves slipped in between the glass and the lemons make it look as festive as it will taste. So I bought a bazillion lemons ( lots needed for the jams Joanna and I have bookmarked) and all of them were huge...too big in fact to fit whole into the 250ml or 500 ml jars (1 & 2 cups), so I went out and bought a box of 1 liter/quart jars...after all I do plan on making pasta sauces and...well...I'm not sure yet.
But still...the lemons were too big to fit, and I wanted to do them just like the book suggested... cutting 2/3 of the way lengthwise, and again at right angles so that I could stuff each lemon with coarse sea salt and keep it together. Truth is I didn't want to spend the $1 per organic lemon which were very small and probably would have fit into the jars.
So I did what a foodie friend of mine suggested (half-heartedly, I might add) of just cutting them in quarters lengthwise, sprinkling them with coarse sea salt and stuffing them into the jars before sliding in the bay leaves and, this time around a cinnamon stick and some cracked cardamom pods, all covered with the juice of some lemons. SOME lemons? Did you check out the photo at the top of the page? Nine and a half to be exact for 2 (1 litre) jars. 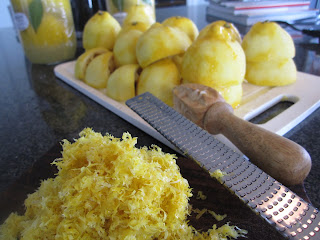 I couldn't just throw out those shells, so...fyi...did you know that 9 1/2 lemons makes 1 scant cup of fragrant lemon zest? Or that it freezes beautifully and a pinch or two added to so many dishes through the winter brings some sunshine to the dreariest of days.
But how does that all make me an idiot? 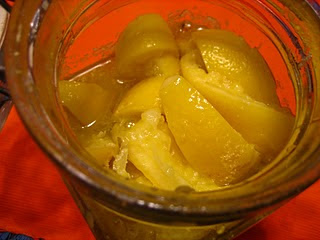 Well that first recipe back in 2008 from Gourmet Magazine calls for...you guessed it...cutting the lemons into wedges! And on the phone with my daughter this morning, she said "Oh, I could have told you that." So why didn't she????
Posted by Ruth Daniels at 8/30/2010

I've been putting off making preserved lemons for sometime now...not sure why, cuz I've always wanted to make some. I watched a movie called Lemon Tree last night which sparked the urge again...and now I feel like I MUST make some. Sounds like this was the winning method...I'm saving it (& hopefully trying it, soon)! =)

It's so easy, so quick and so good. The whole thing...after my insanity with trying to find the perfect jars...took about 10 minutes (plus the sterilizing the jars - I just put them in the dish washer on "hot wash". The hard part will be waiting the 3 weeks until they are really ready to use.

Preserved lemons really do come in handy Ruth for all sorts of tasty dishes.

I cut mine in wedges because I rarely want more than a small wedge at a time for a recipe. Two cut-up lemons fit pretty well in a 1 pint jar, even if you have to cram them in a bit.

If you haven't tried it yet, use a bit of the peel next time you roast carrots (some fennel, thyme and dried apricots are nice too). I can't imagine making carrots without the lemons-you don't really notice it as a specific ingredient, but it would be missed if I omitted it. It adds something to fish as well.

I'm going to steal your bay leaves idea-I don't know why I never thought of adding spices, but now I'm really intrigues. Thanks for the inspiration.