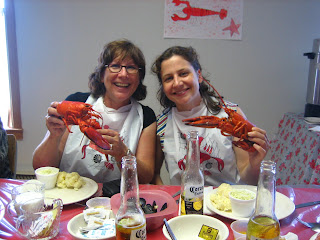 Where has the week gone? I started to write this post on Monday, but I guess I've just been having too much fun with my family. But I still want to share a lovely Nova Scotian tradition...community dinners. Perhaps it's not just a Nova Scotian tradition, but it's a new one to me and I'm glad to be a part of this one in particular...but let me back up a bit... 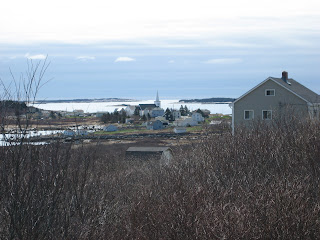 I wrote about Prospect last summer, when we first moved to Nova Scotia, last year. This time we took a much closer look at the village, including a lovely B&B called, naturally, Prospect Village Bed & Breakfast. We haven't stayed there yet...but we will. It looks awesome (You can check out the photos, etc., right here) As you can see from the photo, the little hamlet (you can make out the church and the parish hall that housed the community lobster supper is hidden by it) looked deserted when we drove in last year...almost like a set for a film that takes place in the 1800's. But this past Sunday, was a different story entirely...people from the village, surrounding neighborhoods and some "outsiders" like us were there. I wish I had taken a photo of the crowd, but I was too caught up in the moment.

We were all there for the Prospect Village Lobster Supper an annual fundraiser which is put together by the Prospect Peninsula Residents’ Association to raise money for the local wharf and community library.

Sunday was glorious...the weather was perfect and Ryan, Lex & cute little Piper, friends of my daughter, invited us to join in the fun. That's me and my daughter Sharron at the top of the post, about to get messy over a very juicy, tasty lobster dinner complete with a dish of mussels fresh from Prospect Bay to start, potato salad, cole slaw and for dessert...well, more in a minute. Ryan, Lex and Piper and their two dogs live in the hamlet in the most delightful dollhouse ever. Take a look at the view from their backyard . Apparently, in winter storms, the waves of the Atlantic Ocean, lap their windows! 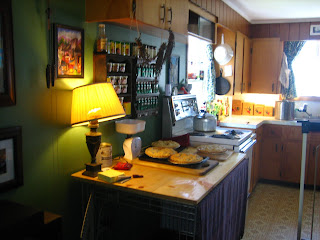 Lex's kitchen and the 4 apple pies she made for the supper...it really is a community affair. Everyone pitches in...men dealing with lobsters (last year over 500 were served) and mussels, the ladies make lots of delicious pies for dessert, 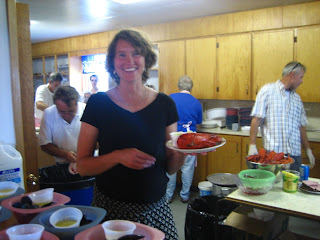 Everyone gets into the act to serve it all up. (I don't remember her name, but she's about to have a baby any day now). 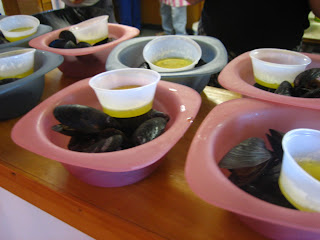 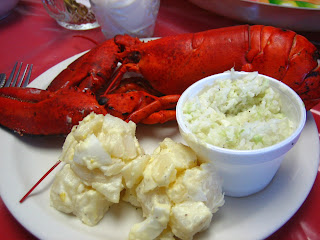 Lobster dinner with perfect potato salad...I wonder who's recipe and if they'd share... 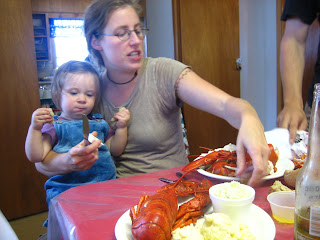 Even Piper loved the lobster (that's her mummy helping her out) 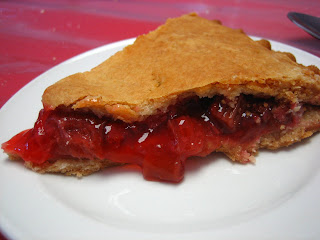 I couldn't resist this strawberry rhubarb pie, but there were lots of choices. 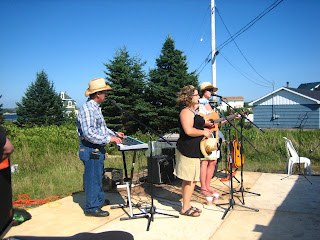 Local musicians entertained outside and artisans sold their beautiful wares in the parish hall...too bad I didn't take any photos of those.

All in all...a perfectly heavenly day and the Lighthouse Route is still my favorite part of Nova Scotia, but we haven't even explored half of the province yet, so you never know.

Does your town/neighborhood have community dinners? I'd love to hear about them.

Wonderful! That must be so great!

I'd love to live where it is "the norm" to serve lobster at a community meal. We used to have community picnics..but fried chicken was the star!

Lovely town you have there!

gosh, that looks like so much fun! i'd love a community dinner...i guess won't happen anytime soon in hong kong ;) (except in soap operas)

So So Simple said...

Ruth What fun. That pie looks great
and I'd almost do anything for that lobster.
Cheers

Thanks all for dropping by. I must say, I do love the lobster dinners

First visit to your blog. I'll be back!

Jealous! I love the east coast and lobster. Looks like a fabulous time.

Eileen, thanks for dropping by and glad you plan on visiting often. I love yours as well...perhaps you'll send some pasta our way too.

Parker, it was awesome. I can't wait to try some other community lobster meal. great music, lots of commraderie and most definitely most delicious lobster.