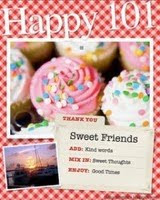 I've been honored with a Happy 101 Award from Jacqueline of Tinned Tomatoes - one of my favorite bloggers and she, received hers from Johanna of Green Gourmet Giraffe, another fave of mine. And all I have to do is write about 10 things that make me happy and 10 bloggers who brighten my day.

What a great idea and before I share my 10 things, I have a little story...

Once upon a time in a city far away (Montreal, is pretty far from Halifax), there was a mummy who lived with her two young princesses, Joanna and Sharron. Every day the princesses went to school in their special royal coach driven by one of three mothers and their princes and princesses. Today they call such a coach a minivan carpool - so much more romantic in the olden days.

Joanna, the older princess, then eight years old was always cranky. She seemed to hate everything and almost everyone. And she would be particularly vocal about her royal displeasure on days that her mummy was at home to greet her. Their castle was actually on the second floor and her mummy would have to buzz her in. Instantly, the tirade of evil deeds done to her would begin.

One day, the frustrated mummy stopped the princess before she could utter the second negative word and told her that she could not come up the stairs into the castle until she told 10 good things that happened that day. Well, you can imagine the crying, and whining, and more crying about how "nothing good happened". So the mummy helped the princess out with comments like..."since coach woman X drove today, you don't have to get in her car...er coach for another week", and "the dreaded teacher, Mrs. Y was going to be away from school for two more days"...

You get the picture. The mummy just turned the negatives into a positive and told princess Joanna that she had to tell 10 good things every day before the frustrated mummy would listen to any complaining. Apparently princess Joanna would start thinking about 10 good things from when she woke up so she'd be prepared (the sooner she could start bitching...ummm...I mean telling the other things). Years later, she told her mummy that that was the best parenting ever. And indeed, she is a very positive person. 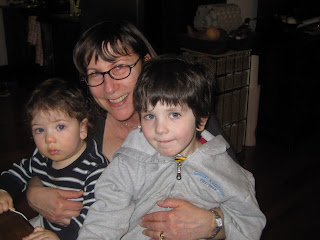 1. Living in the same city as my two delicious grandsons so I can watch them grow and discover their world with them. 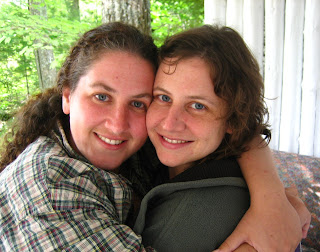 2. Spending time with my daughters, Joanna - mummy of those two angels and Sharron - my baby, who, I'm very happy to say is coming for a visit next week. I can't wait and I'm committed to getting a new photo of the two of them AND their mother.

3. Sunday morning with my Honey - he makes the coffee and then we read in bed until it's time for breakfast - my favorite...his French Toast. We used to do the Sunday NY Times when we lived in Toronto, but now he reads that on line and I read other things.

4. Silly as it seems...listening to the naval base around the corner playing O Canada every morning at 8AM. It always makes me smile. 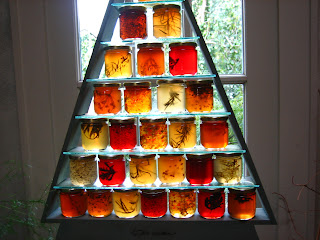 5. Sunny, summer afternoons in the Annapolis Valley - especially wandering through the grounds at Tangled Garden, I've written about it often and their delicious jellies always add that special something to my dishes, like Baked Salmon with Horseradish Jelly. 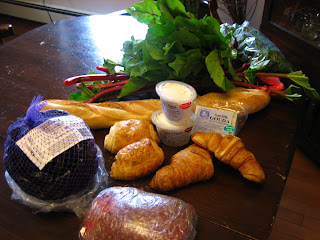 6. Wandering about Halifax Saturday Farmers Market, chatting with vendors and bringing home the most wonderful things. 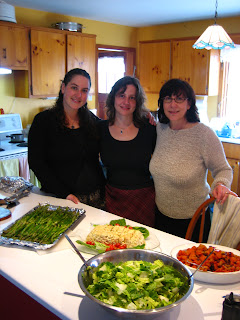 7. The frantic, chaos that is cooking for holidays. Passover is just around the corner and I'm already in mode...discussions with my daughter as to who's cooking what...cookbooks scattered on the table...lists...and lists...and schedules...and lists. And best of all, cooking with my girls. (This photo is from a couple of years ago...the chaos already cleared away and dinner ready to be served.) 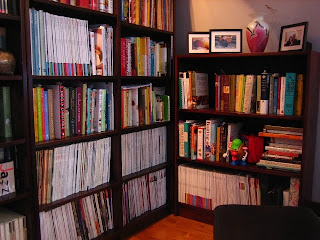 8. Leafing through the myriad of cookbooks that are sent to me to test out. I love each and every one of them. 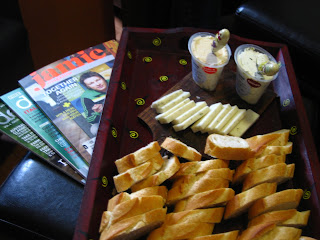 9. Lazy Saturday afternoons (especially on those damp and dreary or freezing cold days), after all the chores and errands are done, watching something or other on TV and munching some fresh cheese and bread from the market and thumbing my way through the latest foodie magazines.

10. All the wonderful food bloggers I've met over the years. It's incredible how much like family they are. And I love discovering new "favorites" all the time.

And speaking about food bloggers...the other part of this exercise is to list 10 bloggers who brighten my day...in no particular order and there are at least 10 fold more out there.

1. Joanne of Eats Well With Others who always makes me laugh and then wonderfully feeds my tummy.

2. Katie of Thyme for Cooking has been my friend forever. I love to hear her stories about living in rural Europe - France at the moment - and renovating houses - they too, are hysterical. And she too, cooks up some awesome dishes.

3. Giz of Equal Opportunity Kitchen has actually become a real life friend and introduced me to BloggerAid Changing the Face of Famine (BACFF) and I invite you all to join and make a difference in the world.

4. Val of More Than Burnt Toast another BACFFer and great blogger who shares great stories and recipes from Canada's other coast.

5. Kevin of Closet Cooking - my first guest host for Presto Pasta Nights and an awesome cook.

6. Heidi over at 101 Cookbooks blog is stunning and each recipe is better than the one before. I can't wait until her new book Super Natural Cooking comes out.

7. I met Elise of Simply Recipes at a Blogher Conference and have been hooked ever since.

8. As with many a blogger I was introduced to Kitschow through Presto Pasta Nights. Her photography will have you drooling - and yes, she does whip up other dishes besides pasta.

9. Haalo of Cook (Almost) Anything is another awesome photographer and cook. I'm always envious of her skills both with a camera and in the kitchen.

10. And since I couldn't decide which ONE last blogger to mention....so to every food blogger out that that I haven't mentioned yet...you're all my number 10 and you all make me very happy.
Posted by Ruth Daniels at 3/20/2010

Thank you SO MUCH Ruth! You are too sweet.

If anyone deserves this award, it's you. I love how your happy things revolve around your family. Just knowing that makes me happy.

Thanks very much for the award Ruth. It will not be hard to find many things that I am grateful for..a great story too:D

Thanks you, thank you, thank you for this award.... for 2 reasons:
One because it's so nice to be acknowledged ;-))
Two - 'cause I've been kind of down lately (weather, cooktop) and being forced to think of 10 good things is just what I need! (like your daughter)

Congrats on the award! Thanks for the award! What a nice pyramid with the coloured glass jars displaying the sunlight in the window!

What an excellent way to turn negatives into positives, Ruth! Bravissima!

(When I was in grade 8, my English teacher told me I was very negative. My reply: "No I'm not".

Later as I reeled back the tape in my mind, the irony was not lost on me....)

All of you make me happy! Thanks for the comments and bringing a smile to my face as often as you do.