Something Special About Cooking With Kids 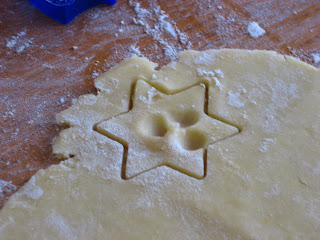 When I was little - perhaps 5, I remember baking with my mom. She was making her famous pecan shortbread cookies (and it's too bad I never got the recipe) and she let me make some from her scraps. Bottom line...mine were not the same as hers...first of all they were grey by the time I got finished patting and rolling and ...repeat about a thousand times. But I was proud of them and give the first one to my dad, watching him closely and holding my breath. I never realized that my father was such a great actor...but he pretended to love them. Frankly, they were hard as a rock and I have no idea how he actually bit into it. From that moment on, I was hooked. 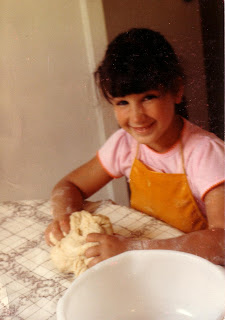 Naturally when my girls were little, I wanted them to have that same sense of joy. That's Joanna above and Sharron below 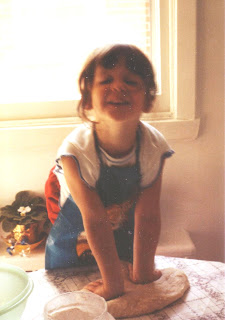 Probably the most insane cooking with kids....but you really have to read it for yourself.

Since then there have been lots of more relaxed experiences, and now another generation of little ones to bake with. 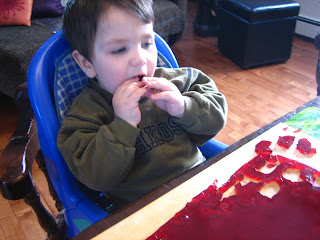 That's Boaz a year or so ago, making jelly candies (very simple - just make jello with half the liquid - I used apple juice and pour into a shallow baking dish) and, below, his brother loves taste testing everything his brother makes - like that blueberry yoghurt Popsicle. 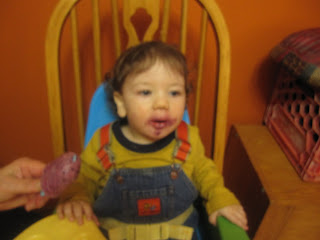 If you're into baking and cooking with kids - and you should be, because it's a great way to get them engaged in the kitchen and developing a relationship with foods other than processed...but I digress. Check out Robin Hood Flour's Baking With Kids for great tips and recipes...and have fun.
Posted by Ruth Daniels at 3/22/2010

Email ThisBlogThis!Share to TwitterShare to FacebookShare to Pinterest
Labels: baking with kids, kids

I am with you, Ruth. I love cooking with my boy. At least, when he will settle down long enough to stay in the kitchen with me. Some of the best times we've had together have been in the kitchen.

Cooking with my daughter was the best time ever.

It still is the best time when I get to cook with my girls.

It must be a great joy!