I decided to do something a little different for my Presto Pasta Night post this time. It's not that we didn't have pasta this week. We did, but...well let me describe Monday. Sharron, my younger daughter was in from Toronto for a long weekend and she wanted to babysit Boaz. So I switched my usual Wednesday babysitting day for her. It was the usual fun watching him discovering his world. 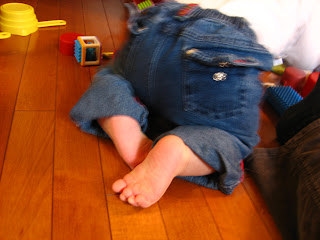 He's finally crawling and checking everything out. So we were taken by surprise when Mommy and Poppa arrived along with Sharron's friends who were all coming for dinner....oops! Where did the day go?

I whipped up some Leek, Mushroom & Potato Soup to keep them from starving while I did the only thing I could...grab some shrimp from the freezer, and saute them with a little pesto. I had bought the most gorgeous pasta, in the shape of leaves and multi colored - like Autumn. Some were made with spinach, others beets and even squid made its way into the mix, so there really was a lot of flavors going on. Lovely, tasty...but forget picture taking.

And, for the first time, Boaz, who generally loves pasta and especially because he's into eating all by himself, enjoys picking up little pastas like orecchetti, little shells and macaroni and, of course there is no more fun than waving fettucine and linguine around, so don't get too close. 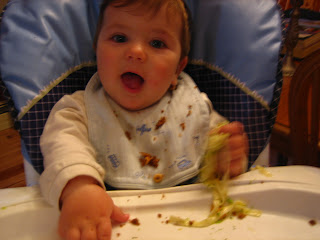 We normally add some peas or little broccoli florets and shredded cheddar and he's a happy camper. But today he rejected my favorite...sacchettini stuffed with potato & leeks. Perhaps it was the goat cheese I added. I'm not sure, but it was cast away - far away - like flung to the other side of the table! 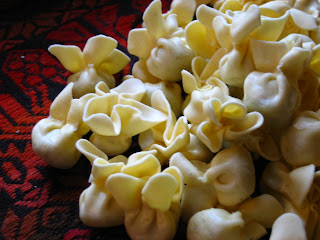 Which made me think of my niece, who's a picky eater. I'm not sure what she's been eating since we've moved (it's six months now, hard to believe), but she basically ate grilled cheese sandwiches or spaghetti. Spaghetti in Katie's world meant spaghetti noodles - not linguine or fettucine - just spaghetti and a little margarine, no sauce, no cheese, no... nothing!

So I'm taking a poll...sort of. If you have children, know children or are/were a child, let me know your favorite "kid" pasta. Mine was spaghetti with meat sauce - and it still is!

My oldest has branched out with spaghetti, olive oil, garlic, parmesan and capers. But both my kids would live off packaged ramen if I let them.

My youngest eats pasta with Parmesan cheese almost daily (no butter, just rinse the pasta off before putting on the cheese please). And pasta means shapes -- usually bow ties or penne. Spaghetti means long noodles. He'll ask what's for dinner and if I say pasta and it comes out in spaghetti form he's none too pleased.

My grown-up baby's first real food meal was spaghetti with tomato sauce. What a photo op! She now has the photo, so I can't share it.

She'd been insisting that she wanted to eat what we ate for a while. I was confused by conflicting theories about what and when to feed kids. I think she was about 8 or 9 months old. She never looked back.

(At three she also got really angry that she couldn't read the comics in the newspaper, so she learned to read, too.)

Great stories ladies. Thanks for sharing.

Judith, Boaz seems a lot like your daughter. He pretty much eats what his parents do. Only thing left out is the spices. They like curries and other spicy dishes, but he certainly is adventurous. His mother only got that way a little later in life.