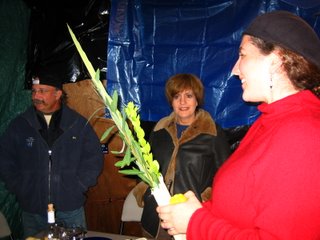 I know I'm slow in writing about our weekend in Halifax, but finally.....That's Joanna and her in-laws in the sukkah. Ezra and Jason (he's like one of the family) built the walls and cross-beams on Friday and my honey and Ezra chopped some fragrant pine branches for the roof on Saturday. In this photo Joanna's saying a blessing using the traditional etrog and lulav. I love this quote that provides some symbolism.

"Earlier authorities examine the form of the lulav and etrog for clues about their meaning. .... explains the items as symbols of the importance of unity among different types of Jews.
The differences between Jews may be substantial, but, like the lulav and etrog which must be held together for the waving ritual, only when Jews come together do they merit a blessing." 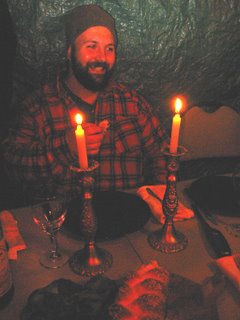 Traditionally, all meals are eaten in the sukkah for the entire week. We settled on lunch and dinners. It was very chilly, too chilly before coffee! So for later in the day, we all bundled up and joked that Ezra looked a little like a Seikh lumberjack. Because it's usually cold this time of year, meals served in a sukkah are generally hearty - thick stews, "rib-sticking" soups and roasts.

On this night we had Ezra's family favorite.....before I tell you what it is....a warning to vegetarians and others who cringe at the idea of eating organ meats! In fact when I told my younger daughter, who's in Chile, her response was Yuck!!...Gross!...Disgusting!....but what does she know? Personally, I love it and used to make it before my girls were of an age to turn their pretty noses up at it. 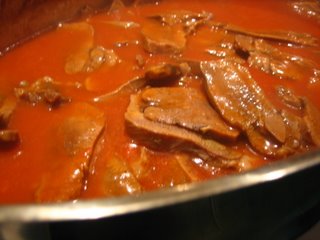 So Joanna and I spent part of the afternoon, looking through all of her Jewish cookbooks for a new recipe for roast tongue - there I said it! We ended up with the old family favorite - Roast Tongue in BBQ sauce from Second Helpings, Please

. We sopped up the wonderful sauce with the homemade challah Joanna made. You can just see it at the bottom of Ezra's photo. So without further ado.....

Home-made Apple Strudel
(sorry, I didn't get the recipe. Joanna sort of followed some recipe in some book and made changes along the way)

Tomorrow's menu is more mainstream - although not if you're a vegetarian. We had a delicious pot roast made in Joanna's newest toy - a crockpot from her mother-in-law. Come back for the recipe.

Hi Ruth,
It is really fabulous that for me (and many others, of course) that you share your life with such written and photographic detail. I find most cultural and religious experiences very interesting, especially the history and relationship to food. Speaking of which, and though this is quite a departure from Jewish cooking, Claudia Roden's new book "Arabesque" is coming out soon. It features recipes from Morocco, Turkey, and Lebanon. I know you're a Roden fan, and you may already know about this book, but I thought I'd let you know anyway. It is being released in the US at the end of this month...not sure about Canada, but it is probably the same date.

Thanks for the heads up about Claudia Roden's newest book. It is already available and I've flipped through it at my local bookstore. It's definitely on my list.