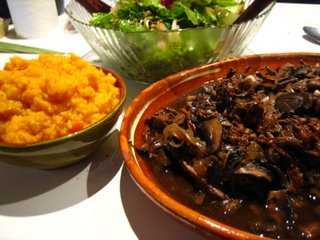 Joanna's been talking about getting a crockpot since her visit last winter when I made Crockpot Lasagna . I offered to let her have mine, because it's a large one and most of the recipes I have feed just too many people. The problem is that it's just too big and heavy to take to Halifax (unless of course, we don't pack any clothes.). So, not long ago her mother-in-law gave her a crockpot that she hasn't used for a long time.

(which turned out to be so good, and had recipes that I could do in my big crockpot and not feed an army! - that I had to buy one for myself....but I digress and there will be more recipes from it later this week). Naturally we bought the book AFTER we put up the roast. So this recipe is really improvisational....and it turned out very tasty, too - with lots of fresh Portobello mushrooms and dried chanterelles and porcini mushrooms to boot.