Getting Ready for Passover 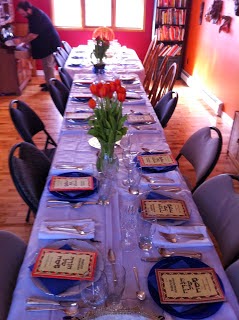 Passover is probably my favorite Jewish Holiday.  The photo is the lull before the cacophony of clattering dishes, noisy guests and general frenzy.  I love the weeks before it starts with the scouring through my favorite Jewish cookbooks, apps and Pinterest for new recipes and discussing options with my daughter (and then always end up with the classics)  You can check out some of my earlier ramblings and recipes.  I love the list making and schedules..


When I lived in Montreal and later in Toronto, where there are large and vibrant Jewish communities, I never imagined that preparing for seders would be so much more complicated in a smaller community like Halifax.  Only two grocery stores in the city carry Passover food and so every Jewish woman I know obsessively goes to them weeks and weeks before, wanting to get the basics before they run out (matzo, matzo meal...).  In Toronto and Montreal, there are lots of kosher caterers, delis, bakeries and butcher shops where you can buy ready made delicious dishes.   Not so easy to find here.  So we need to actually do more "from scratch".   At least I can buy frozen gefilte fish rolls shipped in from Montreal or Toronto and just boil them up.  I think I would forego the dish completely if I had to do it like my grandmother did - hand chopping three kinds of fish, cooking it in a pot of boiling water with fish heads, carrots, onion and a bay leaf.    Way to "fishy"!  not to mention that the house still smells for weeks after all the gefilte fish has been devoured!

Once I finally get the staples, it's time to plan the menu with my daughter.  Which leads me to another difference between seders here and the ones I used to make in Montreal and Toronto when I was the hostess, chief cook and organizer for two seders with about 20 guests each.   It was chaotic, exhausting and ... fantastic. 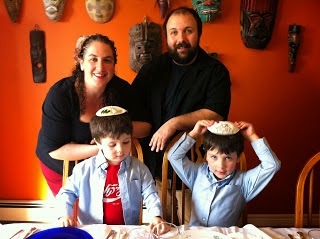 Now it's Joanna and her husband Ezra hosting a giant seder and I cook up two to three dishes and keep the boys occupied. 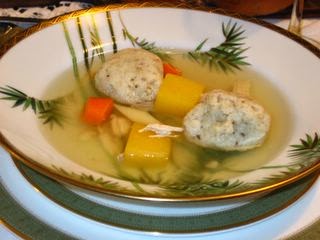 Chicken Soup & Matzo Balls (I made three huge containers and gave them to Joanna a couple of weeks ago to keep in her freezer. I've been informed that she's already used one to remedy bad colds). 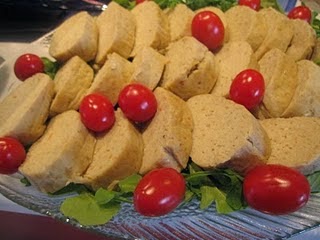 Gefilte Fish with Horseradish sauce.  I just followed package directions, chilled and sliced.  We couldn't find our traditional red "chrain" or horseradish, so I grated a beet into a prepared bottle of super hot horseradish

Joanna's awesome chopped liver - which never looks pretty, but tastes divine! I could feast on this all by itself and not miss any of the other dishes.  It's that good! 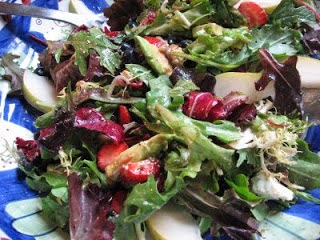 A Spring Mixed Greens Salad with Balsamic Pomegranate Vinaigrette .  All the greens came from Riverview Herbs at my local Seaport Farmers Market. Pea shoots, Baby Kale shoots, fresh mint, watercress and micro greens.   Even though I always strive for eating in season... Spring is late here and so the strawberries are from... well... much further south!

Passover seder mains would not be the same without Joanna`s stuffed roasted lamb (one of these years I will actually get a photo worth sharing and maybe even the recipe) and some traditional sides  like... 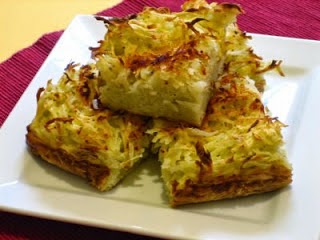 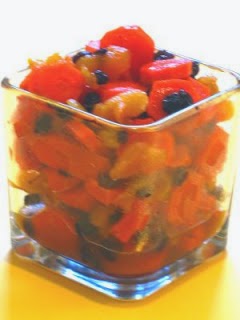 Gingery Carrot Tzimis (same link as the kugel and a must at Rosh Hashonah as well).  It`s been our family tradition from my maternal grandmother`s kitchen before I was born, to my mother and on to me with some minor tweaking along the way. 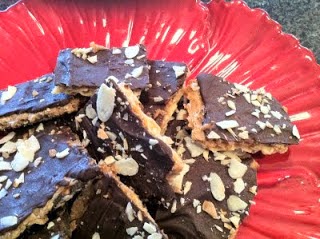 On to dessert... which everyone is really too stuffed to eat, but never too stuffed to nibble on.   Fresh fruit Salad,  Chocolate Covered Matzo, and sundry jellies if our friends from Toronto bring us a gift.

To all my Jewish friends - Happy Passover!  To my Christian friends, Happy Easter when you will be filling in different dishes to the menu, but with the same frenzy!
Posted by Ruth Daniels at 4/12/2014