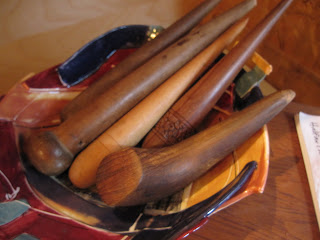 On Sunday, I promised I'd share my visit with Chef Dennis Johnston of fid resto and, in case you're wondering what exactly a "fid" is...it's a cone shaped nautical tool used to splice heavy fishing lines. At fid resto - it's all about splicing flavor!

Before the especially fun part... a cooking lesson in the restaurant's kitchen... a little about why Dennis is one of my very favorite Halifax chefs - and I am not alone. He and fid resto have won The Coast's Annual Readers Best of Awards annually since 2002! 2009 was Best Fine Dining and Best Restaurant and second runner up for Best Use of Local Ingredients, which leads me to another awesome recognition... 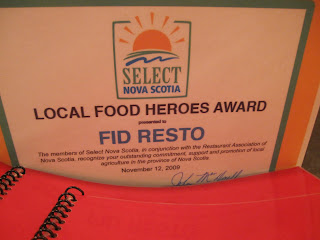 Local Food Hero, given by Select Nova Scotia and The Restaurant Association of Nova Scotia for being such an awesome supporter and promoter of local agriculture. Dennis has long been involved in the Slow Food Movement and is all about connecting the food on the plate to the producers - farmers, fishermen, artisan cheesemakers, et al. I couldn't agree more with him about making that connection and ensuring that our local producers get all our support so they...and we have a wonderful partnership in the future.

I love bumping into Dennis at the Halifax Farmers Market for whatever is in season... 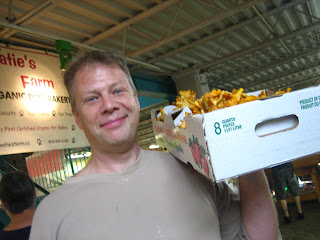 ...like these chanterelle mushrooms, for instance (this photo was taken back in the fall). And I love the inclusion on fid's menu of where ingredients come from...like the warm local wild mushroom tart with Fox Hill aged cheddar. I also love how accessible he is and how keen to share his passion about food with others.

...Segue to my fantastic cooking lesson. The last time I met up with Dennis, I asked him how he prepares the melt in your mouth, droolingly delicious hanger steak that graces his dinner menu, since the steak I bought was a little tough, with a serious sinew down the middle. His response...come over to the restaurant and I'll show you! AWESOME! 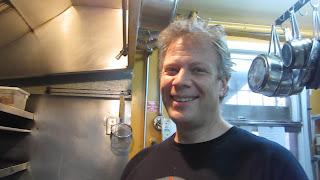 So I went over with my trusty camera that also takes videos, but in my case...not so well. Don't blame the equipment, it's me. I have the cinematographer skills of my three year old grandson. So it might be a while before I figure out how to create a presentable video "How To" and I didn't want you all to wait.

Instead, I cut out some photos to guide through the process of butchering and cooking hanger steak. 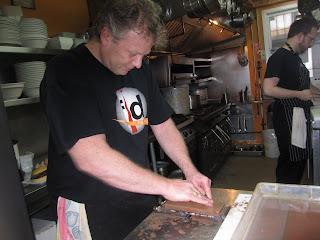 Step 1 - and critical - you need a very sharp knife. That's Dennis with his knife on the whetstone. The process took about 5 minutes, but so worth it.

Step 2 - butchering the hanger steak, which is the muscle hanging from the rib (thus the name) that includes the diaphragm...and why there is only one per animal. It's obviously the most worked muscle in the body and so is very tough, but it's also the most flavorful. All it needs is a little TLC, to have a melt-in-your mouth experience. 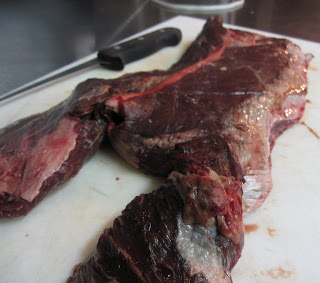 This is what it looks like just removed from the cow and, below, as you would get it from your butcher - removing the main "fillet" - Dennis saves the rest for making his awesome burgers - a blend of hanger (for flavor), brisket (for just the right amount of fat) and eye of round (for consistency) without, I might add zero bread crumbs, eggs garlic or any other seasonings usually found in a burger...but I digress.... 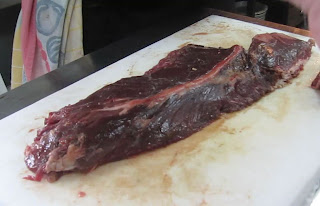 First, remove any membrane and extra fat from the outside and gently... 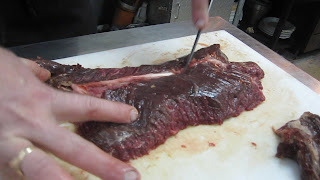 ... using a very sharp knife (this will make more sense when I get the video done), run the edge of the knife along the large white thing (some sources say nerve, others sinew, whatever you call it) that divides the two sections of red meat and note the direction of the grain - important when slicing (here it's perpendicular to the sinew). 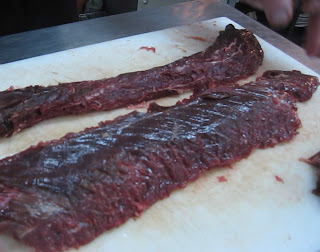 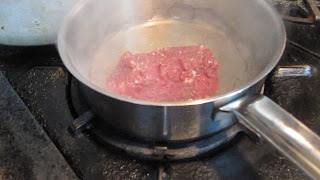 Heat some clarified butter in a pan on high and when hot, add the hanger steak, cut into serving sized portions (about 6oz/170g) and seasoned with a little salt and pepper. Sear for 3-4 minutes per side. Then an additional minute per side until it's done the way you like.

There are three ways to tell when it's done...the touch test - the more it bounces back when touched, the rarer the meat; using a meat thermometer ( it will register 120 degrees F/48 degrees C for rare to 145 degrees F / 63 degrees C for well done); and the "cut into it to see if you like it" way. Just remember to slightly under cook your meat, because it will continue to cook while it rests. 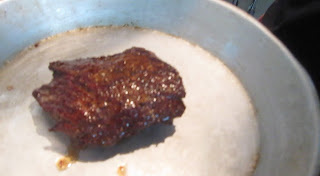 Step 4 - Resting - the most critical step of all. All that cooking tightened the muscle, resting for 5 minutes relaxes the meat making it more tender. And Dennis' big tips...
1) when you take the steak out of the pan and put it on a plate to rest, place it so the side that was touching the pan during the final cooking, is up. If you put the hot side down, it will continue to cook the meat.

2. to accelerate the resting process, put the plate in the fridge for five minutes. Don't worry, it will not be cold. 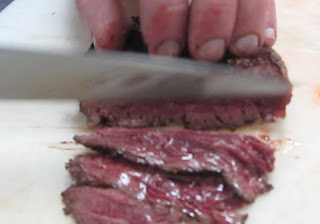 Step 5 - Slicing. Because hanger steak, like flank and skirt steak is a very worked muscle, you need to cut across the grain, and as thin as you can at a slight angle, to ensure a tender mouthful.

Whenever I make skirt or flank steak (and now hanger steak, when I can find it), I marinate it to break down the tissue and make it more tender. Lucky diners at fid resto get to savour their 7 Day Marinated Hanger Steak, but when I was there, we went straight from butchering to cooking and eating with only a little fleur de sel sprinkled on it - and it was tender, juicy and ...in a word...heavenly.

Thanks Dennis and the gang at fid resto! for a great time in the kitchen.