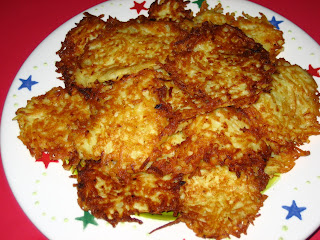 Tonight is the beginning of Hanukkah, the lighting of the first candle (we celebrate for eight nights, but this article in the L A Times tells the story much better than I can), and the eating of potato latkes.

The article, also has recipes for not only the undisputed star of latkes....the potato, but also olive latkes and beet latkes. It got me thinking about my earlier Hanukkah efforts to broaden my family's latke repertoire. 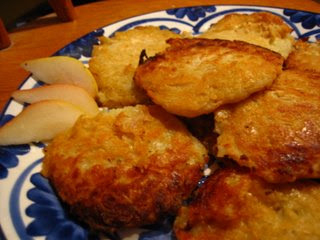 I've made Potato & Pear latkes and 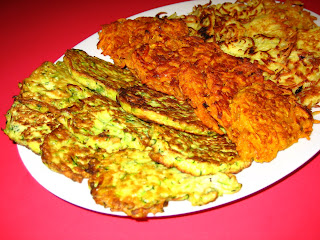 my traditional latke trilogy ...Potato, Zucchini & Curried Sweet Potato latkes that look festive on the table, especially when served with my BBQ Brisket (recipe is in my cookbook). Each type is delicious, but truthfully, I have to make at least twice as many potato as the other two combined. In fact, my daughter and I were discussing the need to make anything other than pure potato latkes for her Hanukkah party tonight, and both came to the same conclusion....NO NEED whatsoever!

We also had another debate... this one over how to grate the potatoes. The "traditional" way is to hand grate the potatoes using a box grater. Of course my grandmother didn't have a food processor option and I wonder if she would have pooh-poohed it if she had. I know my aunt still makes them the "old fashioned" way and my siblings still think they taste better.

Next up is using the food processor to grate the potatoes...but that actually is two DIFFERENT ways. My way makes latkes closer to my grandmother's version, but without the chance of scraping your knuckles until they bleed (my aunt actually puts band aids on her fingers to protect herself). I quarter the potatoes and feed them using the grater blade. My daughter and her mother-in-law take things a step further and use the steel blade in the bowl, pulsing them until the potatoes turn into an almost mashed potato consistency, which cooks up faster.

No matter which way you choose to grate them, here's a tip from my mother so your latkes look pure white rather than grey. Peel your potatoes and leave them in a large bowl of cold water while your processing them. Put the grated potatoes (box grater or food processor grater - I'm not sure about the finely mushed version) in more cold water so they stay pristine while waiting to be combined with the other ingredients for the actual latke making. Just drain and pat dry before adding eggs, etc.

Of course, if you're planning on having more than one real Hanukkah party, them making different versions keeps things interesting. My good friend Norene Gilletz makes a number of different kinds. This recipe is for mini vegetable latkes with smoked salmon & tzaziki. She even has a no-fry variety in her latest book, Norene's Healthy Kitchen.

Latkes make a great buffet dish or side to roasted chicken or meat, regardless of which holiday you celebrate.

Happy Hanukkah Ruth. In my books the latkes would be the star of the show.

In our world too! In fact, my son-in-law can't understand why we're making anything else.

Thanks for dropping by and happy holidays to you too.

Happy Chanukah, Ruth! You've inspired me to try out some latkes today. Hope yours are delicious. :)

I'm making my latkes later in the week... and with all the posts about them I'm reading today, I want them NOW! :)