Spotlight Event - Baking From My Home To Yours 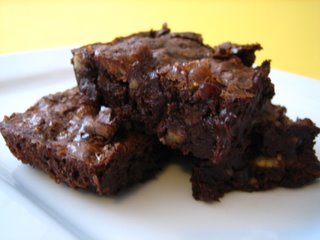 Sara of I Like to Cook invited me to join in the fun of promoting a new cookbook by Dorie Greenspan. It's called Baking -From my home to yours

I'm not really a baker. I don't have the patience, or frankly the understanding to really do it well. This book is perfect for me. The instructions are clearly stepped out and the photographs are stunning. I will even try to make pie shells again. (I stopped trying years ago when every one was a failure).

This is not a tiny book - It weighs 6 pounds - that's close to 3 kilograms and I'm sure I'll gain more than that just from looking at the pictures. Every recipe is a keeper. In fact, my cousin was over for a visit and after flipping through the book, immediately decided to order one for herself.

When it arrived, I ripped off the wrapping and opened the book at random. The first recipe I saw was a tribute to Katharine Hepburn brownies. What can I say - It was Kismet! I can never resist a good brownie and frankly, I've been hunting for ones as good as I remember my mother's being when I was growing up. Usually I'm disappointed, but not this time. Honestly - I've never tasted a better brownie EVER! It has a crisp, shiny coating and chewy center that never turns to cake. It's so rich you don't need icing!

So, without further ado....the best brownie recipe you'll ever try.

These look very gooey and chewy, glad you decided to do some baking!

Ruth those look great. Glad you are enjoying the book. Don't worry if you gain a couple of pounds you can use it as a weight!

Your brownies look yummy to please! That sounds like a great cookbook...l

Vegetarians eat brownies.
You know,just in case you were thinking of making a vegetarian dessert for Shel...or something...
xx
e