Making cookies for Katie yesterday reminded me of the time we made chocolate chip cookies together. That, of course, reminded me of baking with my own daughters when they were that age. So I thought I’d share a story about baking challah with two 5 year olds and two 7 year olds. Aren't they cute?!. 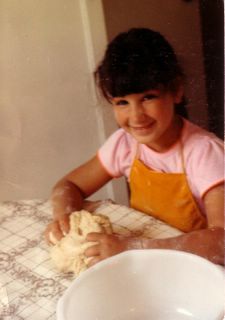 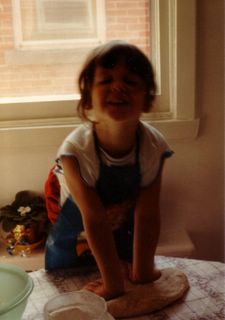 Most people, when thinking about homemade bread baking in the oven, get a very peaceful feeling. The feeling is so strong that as soon as anyone mentions the idea, no matter where they are, stresses melt away and a sweet smile touches their lips. They can see arms kneading dough on a floury kitchen table, hear the slapping noise as the dough is punched and prodded, see the flour dust flying about, landing lightly on the cook’s arms, nose and hair, and of course they can smell that wonderful aroma of bread baking to a golden hue in the oven – even if their mothers never did make bread.

The first time I made challah was with my daughters, Joanna (aged six at the time) and Sharron (aged four) and two of their friends. I wanted to start a new tradition – baking challah with my daughters before Rosh Hashanah, the Jewish New Year. We always had friends and family for the holiday dinner and I thought it would be fun to serve challah that the three of us made together. The idea of each of them inviting a friend over to join us was to ensure that they were kept busy during the long waiting periods for the dough to rise. We made six challahs so that their friends could each take one home and we would have four for our own celebrations. It seemed like a reasonable idea at the time…..but what was I thinking!?!

Imagine four little energetic girls who wanted to do everything but having very little coordination or patience for combining ingredients in any given order or, for that matter, any specific amount. And don’t egg shells belong in the dough? They all thought so. Also, six challahs meant six large bowls for mixing and for allowing the dough to rise. Well, since necessity is the mother of invention, large salad spinners and pots were also used in the process. The kitchen looked like a war zone.

Remember that notion of gentle flour dust falling like snow – well think blizzard. I’m sure there was as much flour on the floor as there was in the dough. Finally everything is in the bowls (and everywhere else) and it was time to mix the ingredients and knead the dough. There is nothing cuter or more delicious looking than eight little hands covered in dough. The challenge was to get each batch properly punched and prodded. Little hands don’t really have the strength for it so I had to knead six batches while giving the impression that they were doing this all by themselves. It was like hitting the fast forward button on your TV, except it was real time!!!

Well that stage done I thought I would have a few hours to clean up and relax. Silly me, little girls have tons of energy and want to play but at that age need quite a bit of supervision. So much for resting! Well, two more sessions of punching the dough and then it’s time to braid the challahs. There is nothing in the world as beautiful or as unique as a bread braided by little hands. The loaves take on a shape and life of their own and like snowflakes, no two are the same. So the challahs are in the oven and impatient angels keep peering through the glass oven door to watch the progress. Finally the waiting is done. Challahs come out of the oven and are left to cool. Eventually friends leave, the house is tidied and the day is done. Bath time removes any leftover flour and dough and it’s time for bed. I have never been so exhausted in my life.


Now for the big day - the holiday table is set and the guests arrive. The girls can hardly wait for everyone to sit down so we can say the blessings over the challahs they made. The pride on their faces as they watch everyone taste their challahs is a memory I will always cherish. When someone said “Great challah Ruth”, Joanna replied, indignantly “mummy didn’t make them – we did!”

Challah baking became our annual tradition. The girls got older and of course they still invited friends to join us, but things got a bit more orderly. Even so, when I think of challah baking, I think joyous chaos and I smile. Joanna now lives in Halifax and continues to bake challah, except now she uses a bread maker.
Posted by Ruth Daniels at 5/30/2005

Yeah, they are the CUTEST! nevermind cute. The pictures look terrific!... gives it more pizazz. The story is great too...very funny. Love you.
xx
e

Ruth, what a wonderful story. I have goosebumps.

The thought of you madly kneading six bowls of dough for some reason really touched me, but also made me burst out laughing. That was such a wonderful thing you did for your daughters, even if you were utterly mad for coming up with such an idea!

PS: Not too shabby for a "baby blogger." I tried to answer your question about categories on my blog, but I don't know if I explained it well. I'm definitely not an expert on coding or anything, but if you have any questions at all about how I do something on my blog, please feel free to ask. I'm one of those needy people who *adores* being asked for directions--heh.