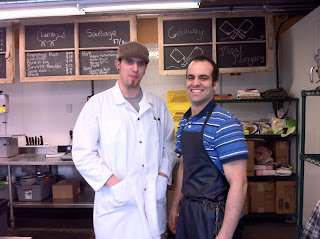 I've been a fan of Getaway Farm grass fed beef since 2009, when I first came across them at the old Historic Properties Farmers' Market, writing often about Chris de Waal (on the left), his wife Leonie, her dad Godfrey Poyser and the rest of the Getaway Farm family.   Their passion for serving up the best tasting beef around is second only to their passion for the way they raise their cattle.

It's where I bought my first hanger steak (and was lucky enough to have Dennis Johnston of fid Resto give me a lesson in how to do the final "butchering" at the restaurant.   And I've done the job myself on many an occasion since then... 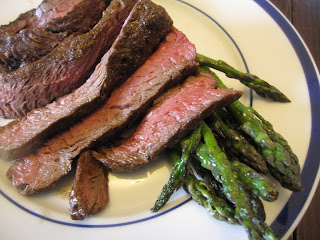 Lime Curry Marinated Hanger Steak
Getaway Farm is where I bought my first skirt steak and even gave you a tutorial on how to remove the membranes before marinating and grilling it.  I'm addicted!  Here's just one of many other skirt steak recipes... and in case you don't have access to skirt steak... think flank, strip loin...whatever your grilling preference. 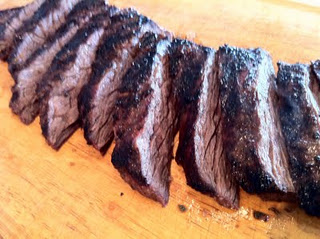 Rosemary & Garlic Skirt Steak
I could go on forever, but this post is really about my chat with Ben Andrews (at the right of Chris, above), the certified butcher at Getaway Farm. 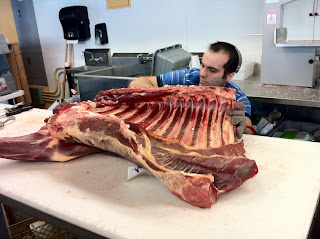 You can actually get to watch Ben work his magic at the Halifax Seaport Farmers Market, six days a week.

Before I actually share highlights of my chat with Ben... a little background....
1.  When I first met Chris back at the Historic Halifax Farmers Market (pre hi-tech Seaport Market), we used to talk about the lack of any real butcher shops in Halifax.  In fact, back then, he was one of just a small handful of beef farmers who sold fresh meat at the market... most were frozen.   Being from Montreal and then Toronto, I just took it for granted that you could go into a butcher shop and have them cut meat to your specifications and tell you about some interesting cut you never heard of and ... more importantly... how to cook it properly.  As opposed to Halifax where there are only meat counters at local grocers... most of it already prepared at some distribution center and prepackaged.  Chris had visions of OWNING a real butcher shop here in Halifax.

2.  Enter Ben Andrews, who did his three year apprentice as a butcher in his home country - New Zealand, famous for their grass fed, pastured beef and lamb.  Throughout the UK, butchering is considered a trade worthy of an arduous three year apprenticeship.   Did you know that there is no formal certification or educational program here in Canada , and less than a handful of certified butchers in all of Canada?  We should be very proud to have Ben now call Halifax home.   Most of our butchers simply learn by working along side an experienced butcher - that is if they are lucky enough to get the opportunity. 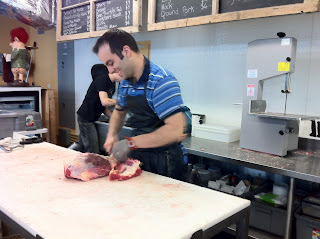 But I digress....Ben and his wife, Katie moved to Canada in 2006 and finally settled down here in NS with their two daughters, Lucy (3 1/2) and Abigail (2 this month).   And enough preamble....let's just jump into our chat.

R: How did you come to think about being a butcher?
B: My father was a bricklayer - trades and apprenticeships are common in New Zealand (NZ) and he suggested I consider butchering as a trade option, since it's a skill that is needed everywhere around the world and I did have a bit of the wanderlust.

R:  Did you work as a butcher on your travels?
B: Actually I did take some breaks over the next 12 years, but I love butchering.  It's part of who I am.

R: What are the differences between Canada & NZ when it comes to raising cattle and butchering them?
B:  One difference is that in NZ, all animals are grass fed and pastured, so there is no need for labels to differentiate them.  There are no uniform standards in North America.  Another difference is the fact that the closest thing to an apprentice program in Canada is the six month training in Alberta.   Not much time to hone the skills.

The butcher at the Healthy Butcher, in Toronto (one of my favorite shops when I was living there - selling organic & locally raised meat) learned from a certified German butcher.  So if you live in Toronto, check them out.


R: Has being the father of two little girls changed your views on food?
B: In NZ, I never really thought about it, since farming is more localized and food more naturally grown.   It is important, what you put into your body.  As a father, I'm even more aware of what we put on our table and where it comes from.   As a society, we seem to have lost our connection to the land and it's so important for our future generations.


R: Any words of wisdom about meat for my readers?
B: You might think that buying grass fed, locally raised meat is expensive, but whatever you might save at your supermarket will probably cost you more to your health in the longer term.   Eat less quantity, but higher quality meat which not only has less fat but more nutrients for a healthier you.


R: Naturally, I have to ask... what is the most economical cut of beef?
B: Beef shanks.  the tough connective tissue breaks down during long. slow braising and tenderizes the meat, which will fall off the bone. 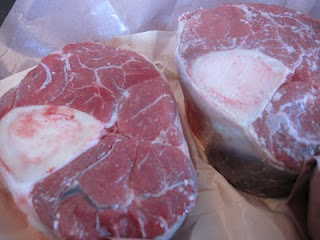 Naturally I had to get some... and made this Asian-Style Braised Beef Shanks 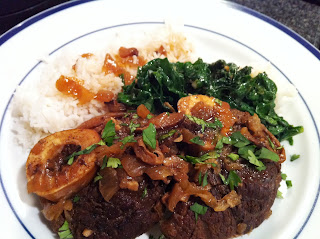 
"Even raising great animals does not necessarily mean great cuts of meat.  The head and heart of a chef's hidden success, is the cut he uses and his relationship with his butcher."

So if you happen to find yourself in Halifax, you must visit Getaway Farms shop at the Seaport Farmers Market any day but Monday for a chat and the opportunity to watch a master butcher at work...not to mention his great smile, a trace of NZ accent, and a wonderful piece of meat to take home..

And remember, the next time you eat a really great steak, remember to thank the butcher!
Posted by Ruth Daniels at 2/08/2012

What do you get when you combine the superior taste of Nova Scotian grass-fed beef with a world-class butcher like Ben Andrews? Simple: the most delectable, mouth-pleasing cuts of meat found anywhere on Planet Earth. Ben & Chris (and the rest of the deWaal and Poyser Families who comprise Getaway Farm) have elevated butchery to an art form. Just take one look at the tantalizing displays at the Getaway Seaport butcher shop to see what I mean. And taste? Well, there aren't enough adjectives in the English language to describe the mouth-watering, flavourful tastes of Getaway products. There truly IS a difference -- check it out for yourself! P.S. Chef's Choice: Beef Tenderloins. TO DIE FOR. :)

It's so great that people like this are so accessible! It definitely makes you feel better about the quality of meat you're getting.