Who Knew I'd Love to Make Preserves! 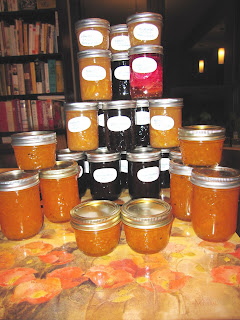 If even ten years ago, you would have told me that I'd be making my own preserves or baking my own bread, for that matter, (other than the annual Challah making, started when my oldest daughter, Joanna was six years old), I'd have laughed and laughed.

Don't get me wrong, I've always loved to eat interesting jams, jellies and other preserves. They make ordinary chicken, fish...whatever so incredibly delicious. It's just that the ones I used were made by others. They'd be the first things purchased at country fairs, farmers markets and on any vacation I've ever taken. And I'd relish them...pardon the pun.

That said, I've definitely become more aware...and more grateful to local farmers and purveyors for their bounty over the last few years. While I'll never be a 100 Mile girl, I definitely look for locally grown & made fare, first. Add to that, Joanna, who most surely was a farmer in another life...or at least got the farmer gene from her late grandmother (no, not my very citified mother). Joanna got me hooked on bread making (I particularly love Artisan Bread in Five Minutes a Day - the rye bread is awesome!) and going to U-Piks. 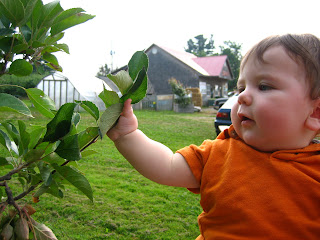 We've been doing apples for years...that's Boaz when he was less than a year old. Now he's three and a half and can't wait for apple picking season - another couple of weeks to go. 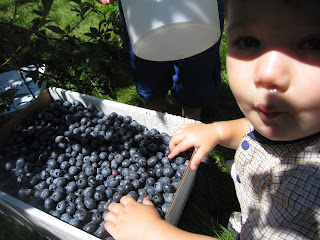 This is his little brother picking...make that mostly eating blueberries this past Saturday, but more about that in a bit.

I've already written about how the stars seemed to align recently with goodies from the Loblaws Grown Close to Home Campaign who partnered with Bernardin for the starter canning kit and several very lovely books about preserving what's fresh now to be enjoyed during the long bleak winter ahead. So I thought I'd share this weekend's adventure and the results, of course -. 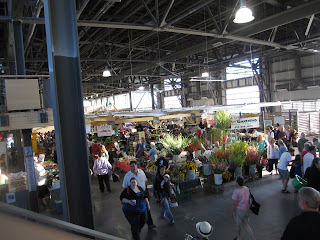 I swear I'll write all about it in great detail very soon. In addition to the usual salmon from a temporarily pared down Mike's Fish Shop stall, some sausages from Sweet Williams - lovely turkey & fennel, plus garlicky lamb (the family was going to come to our place for dinner after blueberry picking), Ran-Cher goat cheese (this time they even had blueberry!) and steaks from Getaway Farm, I was looking for things to preserve.
Beets: 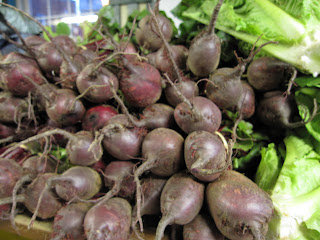 I knew I'd want to make a batch of roasted beets and more of Chef Craig's awesome Pickled Beets, even if I'm the only one who's going to eat them...my family really doesn't know what they're missing. 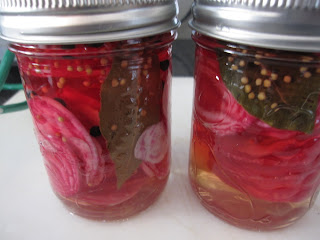 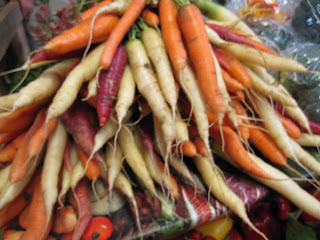 The Carrot & Cardamom Jam from Jams Jellies & Chutneys has been calling out to me since the book arrived back in July. I'll write the recipe up tomorrow, but my quick lick of the hot spoon tells me it's awesome.

I can't believe I started this post at 11 this morning and I still haven't told you about making blueberry jam with Joanna - it was our first attempt at the process and with only two major spills on the stove...it's hard to pay attention with two of the cutest little boys wanting to play.

Guess you'll have to come back for chapter two tomorrow. But the total count so far...22 jars of blueberry jam, 6 jars of apple ginger marmalade, 2 jars of pickled beets and 6 jars of carrot cardamom jam.

In the meantime, don't forget that Amy of Very Culinary will be hosting Presto Pasta Night. Hopefully I'll get the preserved lemons bottled up with enough time to create my pasta dish for her. Send your entries to amy (at) veryculinary (dot) com and cc ruth (at) 4everykitchen (dot) com by tomorrow night, so she can have the roundup ready for Friday.

Hey...
I got here thru the 176 Presto Pasta Night :) Just 3 weeks back I ended up making some nectarine preserve which is as rich and yummy as any strawberry preserve :)
I also tried a strawberry Syrup for my cake topping which is amazing when mixed with Chocolate :)

Welcome and glad to see you've sent in your own pasta for this week's roundup.

BTW, Everything sounds wondesrful. I'll have to check your blog for recipes ;-)