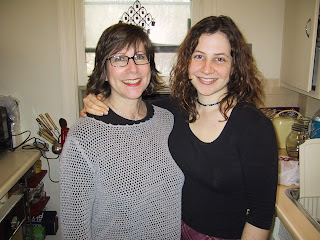 Yesterday my birthday present arrived. Well, my birthday isn't until Sunday, but my Honey flew my younger daughter, Sharron in from Toronto for a visit. I'm determined to get new photos with BOTH my angels this visit.

But this post is really about food...more important..."what to have on hand when you don't really know the plan" food. Surprisingly, I don't seem to have one pasta recipe with my most frequently used combinations - shrimp and cured chorizo. I guess, the throwing them together with a quick toss of olive oil and perhaps a spritz or two of white wine doesn't really count as a recipe. 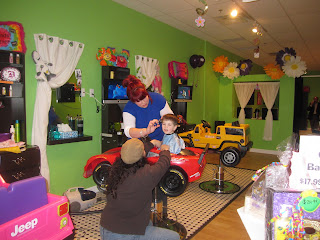 I spent much of the day with Joanna, Sharron's older sister and her boys. It was time for Boaz to get a haircut. And, shall we say, his earlier experiences were ....dramatic?....intense?...how would loud crying and outright refusal be best described anyway? Sharkey's Cuts for Kids is an awesome place and this time around Boaz was a trooper. 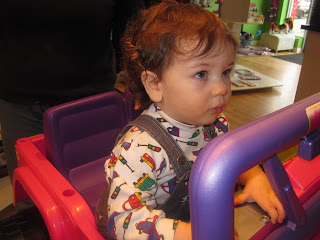 Mummy couldn't quite get herself to cut off Dov's curly locks, so he just had fun practicing for the big day.

But back to dinner plans....Shar's flight was due in at 4:30PM and the big decision was whether to have everyone over to our place, or have dinner at Jo & Ezra's. For much of the afternoon, it was debated back and forth, I could always pull shrimps out of the freezer and chorizo out of the fridge - this time with some sun-dried tomatoes and oil cured black olives in olive oil and garlic. Joanna could do something vegetarian or quickly defrost some boneless chicken. We both knew the base would be pasta. Simple, delicious, and very easy to do for last minute decisioning. 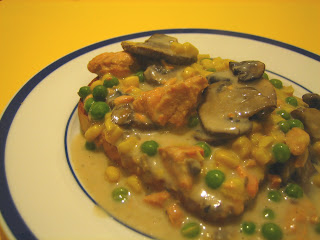 In the end, Shar's flight was delayed and, since Boaz came with me to surprise her, and I promised that we could watch airplanes for a bit, we decided that dinner would be at their place - so that bath & bed time would be easier. Funniest thing of all....no pasta was harmed in the making of this dinner. Joanna whipped up some Creamed Salmon on Toast... another quick dinner made from staples - this time from the pantry.

And tonight, because I'm still not sure of the plans.... 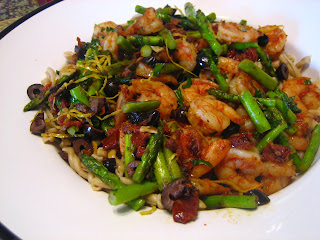 Pasta with Aleppo Pepper Shrimp, Asparagus & Chorizo - my new take on an old favorite. At least that's the plan for now.

Tomorrow is Presto Pasta Night Roundup #156 is being hosted by Savoury Specialist at Our Taste of Life and you still have time to send in your fantastic pasta dishes. Just send your entries to sjm_bernardo (at) yahoo (dot) com with a cc to me ruth (at) 4everykitchen (dot) com
Posted by Ruth Daniels at 3/25/2010

Have a fantastic birthday Ruth!!!!!It will be so special having everyone there and we know the food will be good no matter what.

thanks Val. It certainly will be wonderful

Happy Birthday Ruth! This dish looks delicious-although an oldie but still a goodie =)

Boaz is getting so big! And is increasingly adorable, if that were possible.

This pasta looks delicious. Leave it to chorizo, shrimp, and asparagus to bring a family together.

And have a happy birthday!

Wow Ruth... you look fantastic in this photo! More like sisters rather than mother and daughter :)