Well the end of the month Fife House dinner always comes a little bit earlier in December. Yesterday we did a huge Holiday Dinner and at least 40 residents showed up, including a very festive Santa – even his glasses had red frames.

This year I was asked to bake a ham generously donated by Cumbrae Butchers So, armed with my trusty cookbooks – and naturally, the internet – I hunted for the perfect ham. Sounds simple for many of you who bake a festive ham or at least grew up in a house where your mom did, but not so simple for me. This was a first. Some of the recipes called for cured ham, others simply said “ham” and since I’ve never seen a “naked” ham before, I had no idea what mine was. I know, I know, I could have asked the butcher, but someone else picked it up at the shop and delivered it to me. And yes, I should have called them, but I felt stupid. Surely every one knows what to do with a ham. After much reading, the finalists both came from Nigella Lawson’s Feast

. The choices were The Fully Festive Ham and Ham in Cherry Coke. Naturally, since I can never just leave well enough alone, I took a little of the first and a lot of the second and came up with this….. 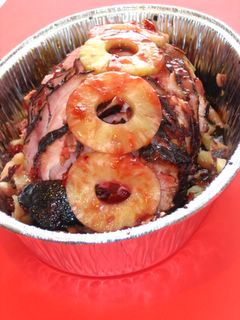 Isn’t it pretty, if I do say so myself?! The pineapple rings were added because that was suggested by my team leader when she called to ask me if I would do the ham this year.

So here’s my adaptation

Directions
1. Place the ham in a large pot with a tight fitting lid. Cover the ham completely with cold water. Bring it to a boil and immediately drain the ham in a colander and rinse. This removes the saltiness from the ham without having to soak it overnight. Good thing I really read this recipe before I started cooking!!!

2. Rinse out the pot, replace the ham, add the onion and pour the cherry soda to completely cover the ham. Mine was a little short so I added apple juice(that I borrowed from the Festive Ham recipe). Bring the liquid to a boil, reduce to a simmer, partially cover and let it cook for at least 2 – 2 ½ hours.

4. Remove the ham from the cooking liquid and let cool on a cutting board.

5. In the meantime, in a small pot, combine the jam, mustard and vinegar and stir until the jam is melted. Taste for tartness. I like mine tangy so I added a tab more vinegar.

6. Strip the rind, if any (mine didn’t have any, but I was a little nervous trying to figure that out) and score the top and sides in a diamond pattern and stud with whole cloves.

7. Place the ham in a roasting pan and glaze with the jam mixture. I added some canned pineapple slices and glazed some more.

8. Bake in the hot oven for 15 minutes or until the glaze looks dark and gorgeous.

10. Serve with the rest of the glaze as a sauce. Everyone loved it and thought it would be great to serve with lamb instead of mint jelly.

Here’s the entire menu for our delightful holiday dinner.
Hors d’oeuvres
Cheese, pate & crackers
Shrimps with chili cocktail sauce
Main course
Roast turkey & cranberry sauce
Ham & cherry, currant sauce
Bread Dressing/Stuffing (you say potato, I say po-tah-to. There seems to be a debate over when to call it stuffing and when to call it dressing. I'll call it anything you like as long as I get to eat it!)
Mashed potatoes
Scalloped potatoes
Roasted Brussels sprouts with shallots
Roasted turnips, julienned and seasoned
Green beans and carrots
And naturally – tons of delicious gravy!!!
Dessert
Apple pie
Pumpkin pie
Chocolate brownies
Squares & cookies

I wish you all a happy holiday season and the most fabulous 2006!