A Visit from the Fairy Hobmother 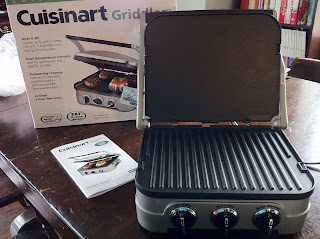 Before I say "thank you" and it will be a HUGE thank you to the Fairy Hobmother, I need to say an equally big SORRY! for not really believing. Perhaps it's because I personally have "been" the Tooth Fairy more times than I care to count. Perhaps because, although I don't celebrate Christmas, I have many friends who have dressed up as Santa, brought gifts down a nonexistent chimney and eaten many a cookie, all to bring some magic to a child the next morning. So I've come to the conclusion... there IS no real fairy!

Perhaps I've become cynical because of all those emails and phone calls telling me that "I'm already a winner", which in the best case scenario, they add me to a list and I'm bombarded with other equally nonexistent "prizes"... I use the term loosely. In fact, I've never won anything and no one has ever followed through with a promised gift.

But I love Joanne of Eats Well With Others and trust her, so when she said that she got a new food processor just by mentioning that in another friend's comment section, I (sheepishly) left a comment saying that my poor Griddler was gasping for breath. I didn't really expect anything. In fact, I didn't even mention it to my Honey... who is the real skeptic in the family. After all, it was just in a comment on a friend's blog, and I really didn't think anything would come of it.

To my surprise, the Fairy Hobmother contacted me. Still being cynical, I thought I'd wait until my nonexistent "gift" arrived before writing about it. To my immense surprise, within days I received my brand new Cuisinart GR-4N 5-in-1 Griddler

! So if you leave a comment about what appliance or item you most wish you had for your kitchen or home and why you need it, who knows, you may be receiving a visit from the Fairy Hobmother yourself in the near future!

Here are a few favorite recipes I'll be whipping up... (none of the old photos are worth sharing, but I'll be adding new ones soon enough.

Grilled Tomato, Goat Cheese & Pesto Sandwiches (or any other "middle" you choose for your grilled cheese)

By the way, my younger daughter, who is a lot more open, asked for my gasping old Griddler and it's on the way to her too. I'm not quite as awesome as the Fairy Hobmother, but I still have my moments.
Posted by Ruth Daniels at 8/16/2011

I too want to believe in the Fairy Hobmother. Considering the fact that I am here on the site where pasta reigns supreme with your event Presto Pasta nights I feel I really need a pasta maker!!!!!!!! I have never attempted making my own pasta dough since the thought of rolling it thinly with a rolling pin just seems like too much muscle work. I promise I will participate in PPN more often with my creations of ravioli and lasagna!

Great choice of a kitchen toy if ever there was one.

My kitchenaid mixer is need of some attachments! I would love to be visited by the Fairy Hobmother and have her bless me with the Pasta attachment set :).

I have really been wanting to make some homemade pasta but I need that set and just have not have the funds to get it yet.

what a lovely gratitude post Ruth. We are busy building a house and with that comes trying to fit appliances for a kitchen. The list of course is endless but as soon as I have a stove and oven which are a necessity, I am going to save up for the Kitchen Aid food processor. Something I can live without but would love of course. May the rest of your wishes and dreams come true :)

That looks like a great griddler Ruth. You deserve a nice treat. I too believe in the fairy hobmother as I have already been blessed with a visit. If you are interested anyway, I would probably wish for a cookbook stand or a bunt pan. I have so much already and so littel room, but would love either of these. I am sure I will get around to buying them sometime :)

Yay! I'm so glad that so many people I adore have been gifted what they wanted! The Fairy Hobmother truly is a wondrous being!

Congrats to you - how wonderful! You'll get lots of good use from that Griddler. I am hoping Fairy Hobmother will grace me with a visit so I can acquire a bread machine. Fingers crossed!!

The best thing ever would be a blender that really blended, not just sounded like a garbage disposal, smelled like burning metal, and turned only the bottom inch of the pitcher into a real smoothie! Does that exist? I've looked at blenders, LOTS, but I am skeptical that any would really get the job done. I mean, what's the diff. between the $30 one and $350 one?
(I so won't be buying the $350 one, so if I shell out $75 will I be disappointed and left thinking, "Man, I guess you really do have to spend $350." I really hate this routine.)
Someone save me! Share your knowledge!

very sweet post! i despereately need a ne kitchen aid as mine is literally falling apart. with a kid in the house and all the christmas baking coming up, it would be simply wonderful to have a new one! best from faraway berlin,anja xx

I'm happy for you. Although a token gesture (some vouchers) was made in order to get a blog post, my wish sadly wasn't granted. So I remain a cynic, but genuinely happy for you and the others who have been granted their wish.