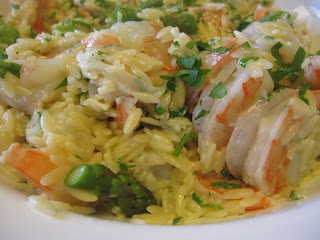 As I mentioned before, we're moving to the burbs at the end of July and people are already asking me if I've started packing. Seriously folks, we've only been here three years, and ...yes, it's true, we've got more stuff than we started with, but I don't think we need that long to live with boxes everywhere.
That said, I have started to cull my prized foodie magazines, ripping out recipes I actually might make and recycling the rest. Kudos to Epicurious.com for a very cool feature. First of all, 99% of the recipes I love from Bon Appetit and Gourmet are on the site, and what's even better, you can save your favorites to your own online recipe box that's actually searchable...much more searchable than the box on the top shelf of my bookcase. The box of recipes I culled before moving to Halifax...the same box I'm ashamed to admit, I've never opened.
Which leads me to tonight's dinner. Gourmet Magazine, May 2009 had an awesome looking risotto recipe. Well...it's Thursday and the only pasta we've eaten this week was Sunday's delicious creation of leftover Baby Bok Choy & Shitake Stir Fry & Pasta. So what could I do but change up Gourmet's risotto and used orzo instead, which makes my pasta version of risotto perfectly acceptable for a Presto Pasta Night Roundup entry.
I'm in just under the wire, but I had to share this Lemony Orzo with Shrimp & Asparagus because it was too spectacular to keep to myself. I'm sending it to Susan, The Well Seasoned Cook, who's this week's fantastic Presto Pasta Night Roundup Host.
See you all at tomorrow's roundup!
Posted by Ruth Daniels at 5/20/2010

Orzo and lemon I feel like I am in Greece, pass me the sun screen, please.

Boy oh boy, shrimp, lemon and asparagus together with orzo. Sounds like a delicious combination I've got to try.

(We have an unopened box in the basement from when we moved over 20 years ago. Now I'm afraid to touch it. What if there are giant spiders?)

Thanks all, and Elizabeth...I'd be wearing rubber gloves or...perhaps it's time to just junk it ;-D