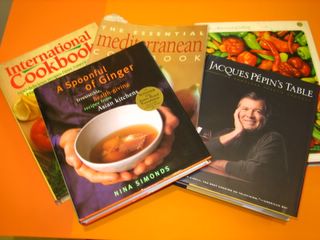 I am so excited to be co-hosting this month's Weekend Cookbook Challenge with Sara of I Like To Cook. I love all the themes up to now -
Cookbook you've had the longest
Savory Comfort Foods
Shades of Orange I really got carried away with this one!
Easter Breakfast & Brunch
Cinco de Mayo
Picnic Fare
Lucky 7

So it was quite a challenge to come up with something a little different this time around. Even though (in North America, at least) it's quite easy to find restaurants from cultures not our own, but we tend to cook the same "comfortable" dishes we've grown up with.

For example, I was born in Montreal, Quebec, Canada as was my mother. My father was born in Quebec City but moved to Montreal when he was two. Both sets of grandparents emigrated to Canada in the very early 1900's from Russia and Poland. So, much of the food I ate growing up was either "Canadian" or Eastern European - very meat and potatoes . If we wanted something different, we would go for Chinese, Greek and Italian dishes (except for spaghetti and lasagna that my mother made) in restaurants. Although I did make some exotic meals once I had my own kitchen, it didn't (and still doesn't) happen very often.

Now I live in Toronto which is the most multi-cultural city in North America. You can eat foods from everywhere in the world. In fact, I live just a five minute walk to Yonge Street (apparently the longest street in Canada) and within 10 blocks there are Irish pubs, as well as Indian, Thai, Chinese, Italian, Greek, French, Japanese, Mexican, Middle Eastern as well as fusion (there probably is a new word to describe upscale cuisines that marry flavors from around the world) and, of course American wing, rib & burger joints. I am not exaggerating!!! And I don't have to go much further afield to eat Ethiopian, Korean, Russian...the list is as long as there are countries around the world. It's just so easy to explore different dinner options here. Not only that, we are fortunate to have vibrant ethnic communities with thriving markets where one can purchase ingredients to make "authentic" dishes at home. Hopefully you have access to ingredients for foreign (to you) foods near you - think half-way across the world - up or down, east or west.

Just to be clear...this month's Weekend Cookbook Challenge is to find a recipe in a cookbook you own, that is foreign to you.

I must confess - I love food! From everywhere! I know, you're shocked to find that out. Just kidding....but one of my favorite cuisines is Indian (more from the north because I'm a wimp when it comes to the really spicy dishes from the south of India). I've made a couple of feasts over the years and have some great cookbooks too. I love The Cooking of India from the Time Life Series that is now out of print. It's the most beautiful photo journey through India with the focus on food. Two Madhur Jaffrey cookbooks Quick & Easy Indian Cookeryand her Illustrated Indian Cookery grace my bookshelves. I also have Creative Cooking - Indian with "how to" photos. 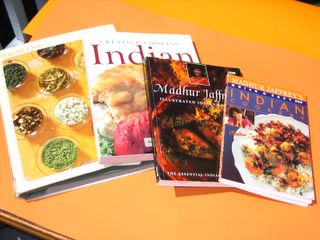 Here's my planned menu...I always go to extremes, but one wonderful dish from each of you would be awesome!

See you at the round up, September 5th.

I love indian food! Can't wait for the round up to see pictures of that amazing feast!

hi
ruth
i must say you are really great!!!
To plan such an ellaborate menu and that too of the foreign recipes needs real guts!!!
best of luck to you, i am always there if you need something feel free to ask.
you have a great collection of indian cookery books i too feel like buying one madhur jaffery which is titled flavours of india are all instructions in her books exact do the dishes come out well.
bye
mahek

lol!! The feast does sound wonderful, doesn't it - I've chosen all my favorite dishes I enjoy when dining out. Let's see what exactly I've gotten myself into!!!

Mahek - I may just take you up on your offer. Too bad you live so far away or I'd invite you over to lend a hand and join the feast.

Thank you for visiting my site and your warm comment for my potato salad. I will participate this WCC, I just brought two cookbooks from Wales, I hope that's foreign enough.

Ulrike, Wales food sounds wonderfully foreign to me! Can't wait to see what you come up with.

its fascinating to see the attention indian food is getting and i would be interested in taking part in ur "foreign" cooking, though i have to decide what as yet. Nice blog.

Hi Ruth,
I will be submitting to the WCC for the first time, and though nervous, I am mostly excited by it. Seeing your menu is inspiring. I might have a smaller menu for my offering of Middle Eastern delights (from Claudia Roden's "The New Book of Middle Eastern Food"). I am really looking forward to seeing your butter chicken...I might even be cheeky enough to ask you the recipe for it once the challenge is over.
Take care,
Shaun (new blogger)

Shaun, the recipe for butter chicken is already posted.

I can't wait to see which of Claudia Rosen's Middle Eastern delights you come up with.