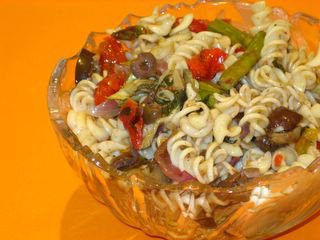 I must admit, pasta is not my favorite base for a salad. I much prefer rice. So normally I would have done the roasted vegetables with rice but I'll share a secret...don't tell anybody

Recently I got a new washing machine - it's amazing, by the way - but in order to get the old one out of the basement and the new one in, I had to move two tall IKEA bookcases at the bottom of the stairs. They serve as my pantry. Naturally the shelves were full and had to be emptied before I could move them. My daughters helped me (Joanna was in from Halifax, and Sharron was sorting her own stuff before her big move to Chile). We found at least a dozen packages of various shapes and sizes of pasta. My only excuse (I feel I have to have one), is that ……. I love variety? Old age and forgetfulness is creeping in early?....you know something? I have no excuse. Anyway, that’s the reason for pasta salad. So here’s the simple recipe with no accurate measurements.

Directions:
1. Cook pasta according to the directions, rinse, drain and toss with 1 tbsp olive oil to keep them from sticking together.

2. Place the asparagus, mushrooms, onion, tomatoes, eggplant and artichoke hearts in a single layer on a shallow baking pan and drizzle with some olive oil, salt and pepper, toss and roast in a 400°F/200°C oven for 10 minutes or so until the vegetables turn golden. You might need more than one baking sheet, depending on the amount of vegetables you want to use. Do not crowd them otherwise they will just stew. You want them quite dry as they will still give off some liquid once the vinaigrette is added.

3. In the meantime, prepare the vinaigrette. It should taste very tart since the pasta is so bland and really absorbs much of the flavor. I promise it will mellow when it sets.

4. To assemble: Place the pasta, olives, vegetables and herbs in a large mixing/serving bowl, pour the vinaigrette over it, toss, taste and adjust for flavor. The amount of dressing should be about ½ - ¾ cup, initially. After the salad marinates in the fridge for at least 1 hour you will notice more liquid from the vegetables. Just toss and taste before serving to see what’s missing.

That looks delicious, and the color pallet is beautiful.

hi ruth, like you, i'm not big on pasta salads. but yours does look particularly enticing...