Chicken Soup for the Body & Soul 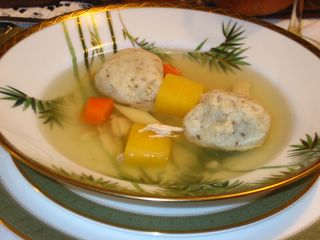 It’s funny how even in one family, there can be so many varieties of the same dish. I always thought my mother made the best chicken soup in her family. It was clear and subtle in flavor. But then I tasted my Auntie Shelley’s version (my mother’s sister) and it was awesome – rich and golden, almost silky in your mouth. I’m a convert and I think you will be too.

Directions
1. Place chicken, onion, celery stalk with leaves and 1 sprig of dill in stock pot filled with 4-6 quarts of water. I use a stock pot so that there is enough room for the chicken and vegetables without overflowing.

2. Bring to simmer (just little bubbles around the sides of the pot) –Never to a boil. Then reduce heat to medium-low. This gentle heating ensures that the soup will remain clear.

3. Skim soup of fat and scum frequently. This usually takes about 30 minutes. Add 2 carrots, 2 parsnips, half of the turnip, 1 sprig of dill, salt and pepper and cook partially covered for 2 hours over very low heat. Add salt and pepper to taste. (See note)

5. Using a slotted spoon, remove chicken and vegetables from the broth. Debone the chicken, dice and save the meat for salad or crepes (see recipes). Save the carrots, parsnip and turnips for a delicious mash and discard the celery and onion.

6. Let the soup cool to room temperature uncovered until cool before refrigerating.If you leave the soup covered to cool, it will turn sour.


Best made the day before.

For serving:
Season with salt and pepper to taste. Add cooked diced carrots, parsnips, turnips, some shredded chicken and matzo balls. Add a fresh sprig of dill. Simmer gently to heat so the soup will remain clear.

Store vegetables and matzo balls separately from the soup or they will turn to mush and the soup will become cloudy.

Rock Hard Matzo Balls
From Every Kitchen Tells Its Stories

I grew up believing that it was just that my mother goofed early on in her days in the kitchen, before she really learned how to cook and that we all just liked them that way. (My father used to joke about how she couldn’t boil water when they got married and he taught her everything she knew.) But my aunt recently told me that my grandmother did the same thing and that actually, my family has been making them this hard for generations. I guess it's like bagels, some like them hard, some soft.

2. In a large bowl, beat egg whites until stiff. Slowly beat in egg yolk mixture. Fold in matzo meal, salt (and dill – optional). You stop adding matzo meal only when your spoon can stand alone in the center of the bowl. Start with 1 cup and add more if needed.

3. Chill mixture for at least 1 hour in the fridge before forming balls.

4. To form balls, grease the palms of your hands with melted Nyfat and roll soupspoon sized ball until round. Drop into boiling water or chicken stock.

5. Cover and simmer (very low heat) for 10 minutes. Remove matzo balls from soup with slotted spoon so that all liquid drains off. Let them cool before storing them. If you leave matzo balls in the soup they will disintegrate

Tips & Variations
Store them separately from the soup in a zip lock baggie, otherwise they will disintegrate and the soup will become a cloudy mush.

Return to soup after it has been reheated and simmer for no more than 10 minutes before serving.

A delicious variation is to add 2 tbsp snipped fresh dill to the mixture in step 2.

What a fun post! I'm normally not a huge chicken soup fan, prefer the creamier soups than the brothy ones but that sounds great. I love the pic of the matzo balls. I had my first m ball soup at a Jewish deli in the city and thought it was delish! Will have to try this version

Just like my great grandmother in Brooklyn used to make. I'll try it! Thanks Ruth. (Ruth is my mom's name too.)