Many people have written to me about the Dreaded Brown Rice Diet posting. I obviously hit a nerve.....the Motivation nerve, that is. I guess we all want, at some point in time, to change the way we live - stop smoking, stop drinking, start exercising, go back to school, start eating healthier, lose weight, gain weight, change jobs. Anything that will make us feel better, give us more energy and a positive spin on life.

Years ago I quit smoking. Well, like many, the quitting part was easy. I did it at least 100 times. Usually it was when I had my annual bout of pneumonia. When one feels so sick that you can't get out of bed, it's easy to quit. Then I would get well and start back up again. My daughters would hide my cigarettes, break the last one in the pack, and even flush them down the toilet. All that did was make me want to have another!!! One of them even made me a pretty pink and blue papier maché ashtray that says “DO NOT USE” around the outside and on the inside, a Surgeon General’s warning “The Surgeon General has determined that smoking is hazardous to your health. SO REMEMBER IT!!!” I still keep it in my living room. 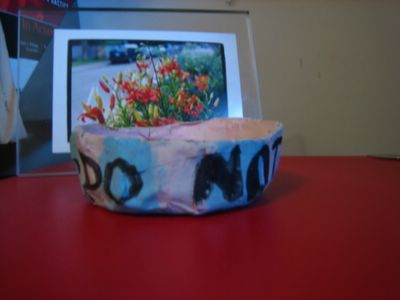 Just to show you how different they were. Joanna, my older daughter, would be indignant and tell me, in a very haughty tone I might add, that I was a murderer – killing her with second hand smoke. Sharron, my baby, would cry and tell me I was going to leave her an orphan if I didn’t stop. That just made me want to have a cigarette, too.

So, as you can see, none of the “good” reasons to quit worked. What worked for me was a sudden “AHA!!!” at work. My boss and I had to attend evening meetings with a group of volunteers, many of them older or committed non smokers. For a long time, smoking was allowed in the meeting room. Then it was decided (rightly so, in hind sight, but unpopular with the smokers at that time) that there be no smoking during the meetings. My boss and I would take turns and sneak out for a quick hit in the hall. It was one of those evenings, as I kept looking at my watch and not being able to concentrate on what was being said around the table, escaping for two or three deep drags on the cigarette, returning and having to ask what was happening, that it hit me. How could I let this take control of my life?! That was 17 or 18 years ago and I’ve never had one since. The first few weeks were challenging. I couldn’t have coffee or tea with dessert (that was a trigger and favorite time to smoke). I don’t remember being difficult to live with, but others do, I’m sure.

Now, the losing weight issue – that’s another story!!! I used to get on the scale and be disappointed with myself, whining about NOT having a waist anymore and wishing I looked like some twenty-something model, complaining about having no energy, thinking “I haven’t weighed this much since I was pregnant”. Usually it would just make me eat more chocolate and cookies. Sometimes I would even start exercising (that never lasted very long-probably because I would go overboard and hope for magical improvements in a week) and actually try one of the latest fad diets. I did lose 15 pounds on the Cabbage Soup Diet, (but put the weight back on almost as quickly). All of them were short lived. I suffered for a week or two on the plan and then was back to over-eating.

So here’s my current (hopefully more mature) strategy. Exercise a little more (short walks every day plus a little something when I can) and eat smaller portions of whatever I want.

Every six months or so I do the Brown Rice Detox Diet. It forces me to stop the cycle of overdoing and restart the cycle of paying attention to ingredients, both nutritional content and portion size. The first two or three days of the diet are usually fine especially in the summer when fruit and vegetables really taste good all by themselves. By Days 4 – 6, I’m getting bored with grilled vegetables and salads with only oil and lemon juice as vinaigrette. Most of my favorite vegetarian recipes call for ingredients not allowed at this stage (no honey, mustard, soy sauce or salt). And, of course, I really don’t like the brown rice much so I’m eager to move on and reintroduce foods. Bizarre as it sounds, I get excited knowing that during days 1-4 coming off the diet I get to add honey, rice pasta, avocados, tomato sauce and mushrooms to my menus.

I’ve been doing this for a couple of years now, so when I start to reintroduce foods into my diet, I actually do it faster than suggested and this time around I actually stopped one day short. Our cousins who have been here on sabbatical for a year are heading home soon – we’ll miss them. We were invited over for home cooked Indian food – how could I resist!?!. It was wonderfully delicious!!!

Today, I’m back on plan and looking forward to tonight’s dinner feast of pasta with mushrooms and my own lazy tomato sauce. Lunch will be salad with one of my usual vinaigrettes that has some Koslik’s mustard and sherry vinegar added. A very tasty day!!!

Oh - and the most important thing - I DO NOT FOCUS ON WEIGHT. What I mean is, I don't get on the scale every day. Instead, I focus on how I feel (what's my energy level like, are my fingers less swollen, am I less huffy when I'm out for my daily walk?) and look for signs that encourage me to continue.
Posted by Ruth Daniels at 8/01/2005

Thanks for your encouraging words. On Friday I learned that I weigh more than the President of the USA. And he's a tad taller than I. Your approach to weight loss seems to be more focused on a healthier mind and body, with weight loss the inevitable result. Thanks! As for smoking, I quit 32 years ago. My mother used to say it was smelly when I smoked in my room (over age 21) but I didn't believe her. Thought she was picking on me. She was telling the truth, but smokers have no idea how bad their habit smells. The other day a doctor was examining me and his hands smelled so badly from tobacco and so did his clothes, that I found myself not liking him. My spouse says I should have told him. I think we reformed smokers are the most intolerant of all.
Peace.

This weekend we went to a concert at a casino not far from here and (because Toronto is basically smoke free, except on the street and patio restaurants) it was really a shock to our systems when we arrived. Within 30 minutes we had headaches and scratchy throats. You're right, I certainly don't remember how bad it was when I was a contributor.

Ruthie...I don't know if I'm leaving a message in the right place(I left another message somewhere else a few minutes ago).
Can people read my messages to you?

I too quit smoking when I realized it was starting to take over my life. Making decisions like... do I spend the evening at a friends house where I have to go outside on a cold winter night to smoke...or stay home and smoke in the comfort of my own house? That was when I decided to quit successfully, 11 years ago.

Now if only we could apply the same thinking to our dieting attempts. Like...if you have to think about whether you'll be seen in public in shorts, bathing suit etc.. (whatever your demons are), instead of giving in to abandoning those clothes ...choose to feel good about yourself and if that means changing your attitude about yourself or changing your eating habits...do it, don't let things like weight or shape stop you from living life! You've only got one after all!

Linda, you are so right. Unfortunately I haven't found that "aha!!!" for dieting motivation yet. I wish we could just go to sleep for a few days and wake up thin - then eat whatever we want and never have to worry.

Good heavens Ruth I have been away from your blog for a while it seems. So I'm starting to read the month of August.

I have been thinking in having a naturopath too, as another family doctor with a different approach. Unfortunately don't know anyone that can refer one here in Ottawa, so I might have to go to the yellow pages and try until I find one I like.

I also need to lose weight (about 80 pounds) but love food far too much. I was doing well on the reduced portion front, until my back problem hit and I took it as a good reason to basically live on raisin bran and whole milk. I wish eating right were easy.

It certainly is a challenge to eat smaller portions. Especially when I "cook for an army" as my father used to say.

Testing recipes for the cookbook I'm writing isn't helping either.