This meme was sent to me by Ana of Pumpkin Pie Bungalow. She has a wonderful blog that I visit often. The theme is childhood food memories that you miss. Thinking about the food transported me back in time. I was playing with my cousins, (that's me on the lower right), tricking my mom (I use the term loosely); and just daydreaming about a million wonderful times. 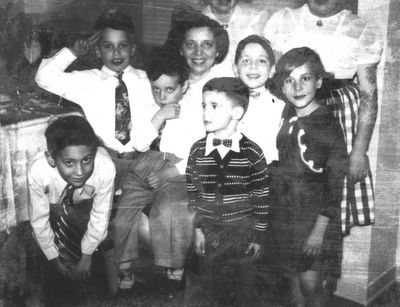 1. Baked beans and ham at Au Petit Poucet on the way to Ste Agathe. Every other Sunday, my parents would drive us "Up North" to the Laurentians to visit my grandfather who spent the last 15 years of his life in a sanitarium for his severe emphysema. On the way we would stop at a fabulous restaurant that smoked its own ham and made heavenly baked beans with chunks of ham in it. Not only would we eat it there, we would take some home too!!!


2. Sponge toffee As a special treat in the Autumn, my father would buy a huge block of sponge toffee and break it into pieces. Then my sister, brother and I would fight over who would get the airy pieces from the middle. It would just melt on your tongue…mmmh. I found a recipe on Christine Cushing Live if you feel the urge to try some.

3. Friday night dinners at my maternal grandparents - lots of cousins (18 in all) and the chaos that creates (especially because my grandparents had a tiny 1 bedroom apartment), and delicious Jewish cooking. My favorite dish was "Chinese Spareribs". Now my grandmother had emigrated from Russia in the early 1900’s and kept a kosher home. To my knowledge, she never ate out at a real Chinese restaurant, so I don't know how or where she got this recipe. She used veal ribs instead of pork and it was heaven to eat. Usually this was served between the chicken soup course and the main meal of brisket and roast chicken. I must admit that even as I write this, I only taste the spare ribs. It was, is and always will be a taste that brings back wonderful memories. 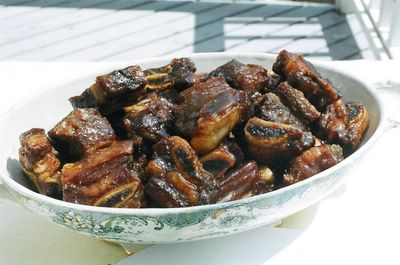 4. Picnics in the car on the way to Cornwall, Ontario - tuna salad, salmon and egg sandwiches. My mother’s sister lived in Cornwall and we often went to visit them for the weekend and longer in the summer. We would bring Montreal bagels, smoked meat, lox (smoked salmon), and other delicacies they couldn’t find locally. Of course that was not to be touched during the journey. My aunt tells me that the trip really took only a couple of hours, but it seemed to take forever to me. To sustain us through the trip, my mother would make tuna salad, salmon and egg salad sandwiches and we'd start eating them before we even left Montreal. Somehow simple things taste sooooooooooo much better in the car.

5. Auntie Shelley's lasagna with a secret ingredient - Piazza Tomasso spaghetti sauce. It was a wonderful Italian restaurant that my parents would take us to for special occasions. There was a magician (Magic Tom) who did tricks and made balloon animals. The real star though, was the meat sauce. I still can’t place the spice that made it taste so wonderful. The restaurant no longer exists but for a while you could still buy frozen spaghetti sauce. I can reveal Auntie Shelley’s secret now, because no one can find the sauce (obviously that was her secret ingredient). Whenever I make lasagna, even though I use a simple tomato sauce as base, it takes me back to those days.

6. My mother’s special holiday cookies. My mother was a fabulous baker and before the Jewish New Year she would bake huge batches of cookies – shortbread with slivers of marchino cherries in the center, peanut butter, nut crescents with powdered sugar and many more varieties. They were amazing and I’m sorry I didn’t get to write down her recipes when I had the chance. Everyone loved them so she’d fill cookie tins for each of her six sisters and brothers and their families, and of course some for us. Waxed paper separated layers of the delicate cookies. When the tins were full, she would “hide” them from us. I use the term "hide" loosely, since she always hid them on a shelf in her closet. Then my sister, brother and I would sneak into the stash when she wasn’t around and take one. We used to think that my mother was a witch or psychic, because she would eventually yell – “who’s been eating cookies?!”. We thought we were so clever moving the cookies around so she wouldn’t suspect. But, let’s face it, when four layers were gone, one didn’t have to be a witch to figure things out.

Here's how the Meme works. Choose 4 bloggers to tag (none of whom are obliged to take part):
1. J of Kuidaore
2. Rachel of Brownbreadicecream
3. Mrs D & Chopper Dave of Belly-Timber
4. I was going to tag Lynette of Lex Culinaria but she's already done a lovely meme. So I leave this open to anyone out there ready to share their personal memories.

Now, remove the blog at #1 from the following list and bump every one up one place; add your blog's name in the #5 spot; link to each of the other blogs for the desired effect.

hi ruth, what an eloquent and terrific post to a wonderful meme. thanks for tagging me - hope to get round to it soon...cheers,j

Thanks, it IS a wonderful meme. It's always interesting to read about what others remember and even more fun to take a walk down memory lane yourself.

I look forward to reading yours.

I loved reading your beautiful memories Ruth. Thanks for taking the time to play along with the meme.

It was great fun.

My upcoming cookbook not only has recipes, it also has stories in it. They're my memories, but the hope is they will jog those of the readers as well.

There is nothing like food from long ago to give you an emotional hug when you need it.

Ruth, I loved reading this, and especially the bit about your mother's holiday cookies. My paternal grandmother, a Polish immigrant to Toronto, used to make cookies much like your mother's--or so I'm told. I was too young at the time to remember, but my mother tells me that Grandmommy used to send shoeboxes full of cookies to us in Oklahoma, and by the time they'd arrive, they'd be completely pulverized into buttery shards. I wish I could remember them better, but I like to imagine that they were as tasty as your mother's--albeit broken into a million pieces!

The Piazza Tomato sauce is still sold in the Montreal area at IGA groceries. It can be found frozen in a box...